We think that one of the best ways to know a country is to taste everything it has to offer. This year it is all about EATING LOCAL: save old tastes and varieties, preserve beautiful cultural landscapes and create memories in a very authentic environment.

Romanian cuisine is not fancy like the French one for example, nor is too spicy or very complicated but yet, interesting and inviting, in short, comfort food at its peak! Romanian cuisine is a harmonious combination of different dishes with a strong influence from surrounding countries, but who succeeds to keep its own personality. Although it has been significantly influenced by the Ottoman Empire, it also includes culinary elements stemming from the cuisines of other neighbour countries: Hungarian, Serbian, Bulgarian as well as Ukrainian.

If you love great food, than you should definitely discover Romanian traditional cuisine. Based on it’s history, Romanians have learned to eat, cook and to combine in different ways, to adapt and to reinvent old recipes, so that nowadays every food lover can indulge himself with exquisite and authentic local meals.

Going on a culinary tour in one or more of these regions, it means being able to savour fantastic dishes, but also learning about the history, culture and people behind popular local flavours.

Transylvania is very well known as the land of Dracula. In fact is more than that. Transylvania is the land of castles, culture and wild nature. The fusion of Germanic and Hungarian have started a mini-foodie revolution with “ciorbas” = seasonal soups, “balmos” = cheese polenta, both to be tried prior to mighty “papanasi” = some sort of doughnuts filled with jam and sour cream.

The two influences are normally based on meats, fresh seasonal vegetables – especially potatoes, fruits, bread and diary products – including a variety of cheese. It is also typical to find a variety of meats mixed together to create the perfect combination for your plate.

Meals for guests usually start with a shot of tuica = fruit brandy- the most appreciated is the plum brandy. Villagers often have a competition to see who can make the strongest tuica– much of which will be a hardcore test for each person who tries to taste it.

Ciorbas (soups) range from sweet to sour, thick to thin. One of the two most wanted are ciorba de burta (tripe soup) tasting a lot better than it sounds, and Gulyás, a delicious soup or stew of meat and vegetables, seasoned with paprika and other spices.

Bulz is basically cooked cheese and polenta with a dollop of Smantana (sour cream) – comfort fodder at its best. 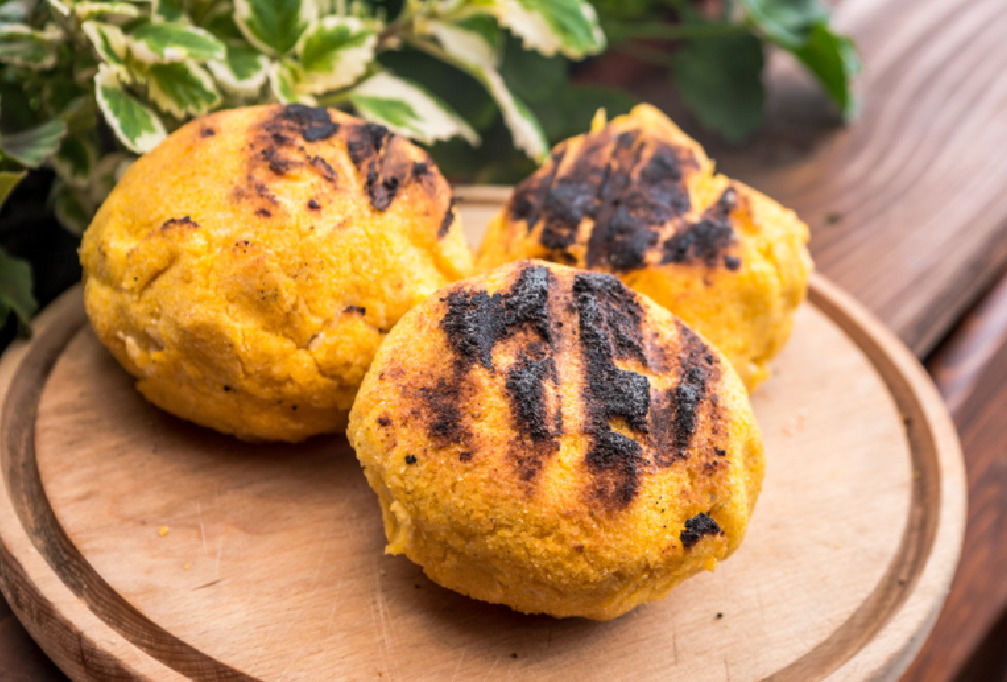 Some of the places where you can feel the authentic taste of these dishes are Maramures County and Covasna Region.

Moldova and especially Bucovina region combine various culinary traditions – Russian and Ukranian – and Bucovina is known as the “homeland of sour cream”. Moldovan cuisine massively use the cheese and corn. Cheese requires preparation for a reduced amount of time – a week up to ten days. This food has ancient roots and it’s directly linked to the development of shepherding in the area. Cheese is not only used raw, but also as an addition to a whole variety of vegetables, eggs, meats and pastries.

In Bucovina, everything is eaten using cream, the main ingredient of its cuisine. People here use most of the time organic, natural ingredients, from their own gardens and displayed with the pride of the farmer who knows how much these ingredients enrich the final product- the Buconvinian dished are made not only to quench your hunger but also to awake the senses so that you can “see” their taste and feel “their appearance”.
Bucovina has all this and something more: it has wonderful people – special hosts who will make even the most demanding tourist a loyal fan of this very special Romanian region!

Lamb drob – is a traditional meal highly appreciated, very popular around Easter time. Usually cooks place boiled eggs in the centre. Other ingredients used are: lamb’s liver, lungs, heart and kidney, green onions, dill, parsley, garlic, eggs (raw and boiled), soaked bread in water or milk. Boiled and chopped, the meats are mixed with the other ingredients and with the spices (salt, pepper). The prawn of the lamb is placed in a tray over which the mixture is placed fleshy. The delicious lamb is served warm ,with salads or garlic, but it is also very cold, as an appetiser, alongside olives and cheese.

“Radauteana” Soup with chicken breast is a very tasty soup, prepared from chicken, vegetables and sour cream.
Like a stomach soup, this chicken soup with cream and garlic is perfect in the morning, after a party, but it can be enjoyed anytime during the day. Lighter than radauteana soup is the traditional “bors”, however just as tasty.

Sarmale is a typical Moldovan dish that also appears in many other parts of the world in slightly different varieties; cabbage leaves or peppers, stuffed with seasoned rice, mixed with chopped peppers, carrots and a few other vegetables, then baked in oil for a few hours. Elsewhere, the sarmale are usually a vegetarian dish and quite oily. In Moldova, sarmale are prepared with meat mixed with the rice and veggies and they’re typically served with sour cream for dipping and a hot chilly pepper.

Another traditional and very popular dish, made especially during the holidays, is Placinte, which are pies usually stuffed with cheese, potatoes, cabbage or apples.

In the south eastern part of Romaina everyone can enjoy the culinary heritage of lipovens – recipes preserved for hundreds of years! Recognized for their passion for fishing, which makes their daily food, lipovens are preparing the fish today using the same old recipes invented by their ancestors. This is why fish is going to be the main character on your plate!

A trip to the Danube Delta has many surprises. From the unique landscape, to the peculiarities of the place (hundreds of species of birds and plants) and to the fish cuisine, everything will amaze you. And, as far as the culinary experience is concerned, it is said that you did not really eat fish dishes until you reached the Delta. Even if you are a savvy cook, Delta inhabitants will show you there are ways to prepare fish that you have not even thought of. First of all, Delta fishermen, before cooking fish, prepare the fins, head and tail, so that the food is richer in flavors. Of course, Delta inhabitants are familiar with all types of fish and know exactly where the dangerous bones are, which they can easily remove.

To learn the secrets of fish preparation, you have to sit next to an authentic fisherman and steel their techniques. One of the main strategies is to cook with water from Danube – it is said to have a special taste. Then the fish soup has to be seasoned and cooked from several fish varieties, and a Delta chef can share some of the old-fashioned recipes.

Roasted, boiled, smoked, salted, raw, dry, main ingredient in soups, brine or stew, fish is at the same time a traditional and exotic kind of food. Lipovens know how to cook the fish the way you have never imagined, so we strongly recommend to leave aside any bias and try:

A Storceac which is an exceptional fish soup, prepared with many kinds of fish and many vegetables.

Saramura : grilled fish, grilled vegetable and a special salty sauce with garlic and herbs. The taste is absolutley faboulos but you have to taste it in order to convince yourself that you will want to try it again and again and again.

Arriving at the Black Sea we find Turkish and Greek culinary influence. Turkish cuisine is largely the legacy of the Ottoman cuisine, which can be described as a fusion and refinement of Central Asia, the Middle East and Balkan cuisine, a wonderful blend of simple nomads, Byzantine luxury and fresh ingredients. It is a kitchen with long traditions, but it remained innocent and fresh, refined by its simplicity, full of flavours naturally presented. The Turkish culinary style has also strongly influenced Romanian kitchen. Sarmale, pot, cataif, baclava, sarailie, coffee, soup, musaca, pilaf. All of these dishes, deserts and many others have been adopted and adapted from Turkish cuisine.

Using a rich variety of fish, captured directly from the Black Sea, Greek cuisine is based on three important elements: wheat, wine and olive oil. Fish and seafood play an important role in Greek dishes, unlike meat, which is consumed in small quantities. Greek cuisine has conquered large territories over the years, such as the Roman Empire or the Ottoman Empire.

Bucharest is an increasingly popular travel destination in Eastern Europe, with a definite hipster vibe of its bohemian outdoor drinking gardens but not only that. In Bucharest there are old buildings with a very special architecture, refurbished into fine dining restaurants. The city may be better known for its hearty Balkan fare and vigorous gut-reviving “ţuica” (Romanian plum brandy), but the traditional tastes have changed. Now, one can find everything from speciality coffee and craft beer, to raw vegan food and Scandinavian delights, all while tapping into burger frenzy and re-interpreted Romanian cuisine.

On the other hand Bucharest offers plenty of restaurants which can satisfy any foreign culinary curiosity. If besides trying some traditional delights the gastronomic experiments are not something to consider, Bucharest has many restaurant where the international cuisine is duly honoured, with an emphasis on French, Italian, Indian, Chinese and American specialities.

The kitchen in South western part of Romania still preserves the habit of preparing food in pots at the ‘test’, technology that offers a great taste to the food. They prepare the food in an original way, keeping the tradition – the most common are the tasty leeks and “stevie” soup. Nowadays you can feel the influence of our neighbours (Serbians) starting with the pots in which the food is being cooked (the clay pot) and going to some of the specific dishes of this area: chicken breast with ”mamaliguta”, tomatoes stuffed with meat or rice, Oltenian “tochitura”, fish brine and famous Oltenia sausages.

Of course everything goes smoother when you have a good glass of wine aside because Oltenia is very well known for its good vineries.

Romania is one of the world’s largest wine producers, ranked ninth in the world and the sixth largest among European wine-producing countries. Since ancient times (6,000 years ago) Romania has been producing wines and its territory is prime for growing grapes used in the production of unique and delicious types of wine.
Romania’s most cultivated grape varieties are for white wines, including Fetească Albă, Fetească Regală, Riesling, Aligoté, Sauvignon, Muscat, Pinot Gris, Chardonnay, Tămâioasă Românească, Grasă de Cotnari, Galbenă de Odobești.

Furthermore, the main grape varieties for red wines are Merlot, Cabernet Sauvignon, Băbească Neagră, Fetească Neagră, Pinot Noir. In addition to Latin languages, one thing Romania has in common with France and Italy is the rich wine country. Can’t wait to explore more? Book one of our Foodie tours and see it for yourself!