Are you planning to spend a couple of days in Romania? Besides Bucharest, there are some great travel destinations close enough to the Romanian capital, but far from the city noise. Sinaia happens to be one of the biggest tourist destinations in Romania and it can be easily reached by car or train from Bucharest.

Former home to kings, political and cultural elites, also known as the “Royal City”, Sinaia invites you to take a walk in time, under the royalty sign. Located at only 124 km away from Bucharest, in the historical region of Muntenia, and surrounded by dense fir forests, Sinaia is a cosy mountain resort that has a lot to offer, no matter the season.

With many historical monuments that have become tourist attractions, in the Eastern part of Bucegi Mountains, Sinaia is a breath of fresh air that welcomes its visitors with a variety of opportunities for outdoor events and activities, like ATV and horse riding, hiking tours, Jeep safari, and also ski and snowboard facilities during winter time.

Down to the Royal Avenue

Sitting majestically on top of a hill and named as the most beautiful castle in Europe by Le Figaro, Peles Castle was the first castle in Europe with its own central heating and electricity.

A masterpiece of German New-Renaissance architecture and once home to Romania’s first king, Carol I, serving as a summer residence of the Romanian royal family until 1947, Peles Castle is a fairy-tale domain, with hidden passages, beautiful turrets and galleries, classical statues,plus some finest examples of European art, Murano crystal chandeliers, German stained-glass windows and Cordoba leather-covered walls. 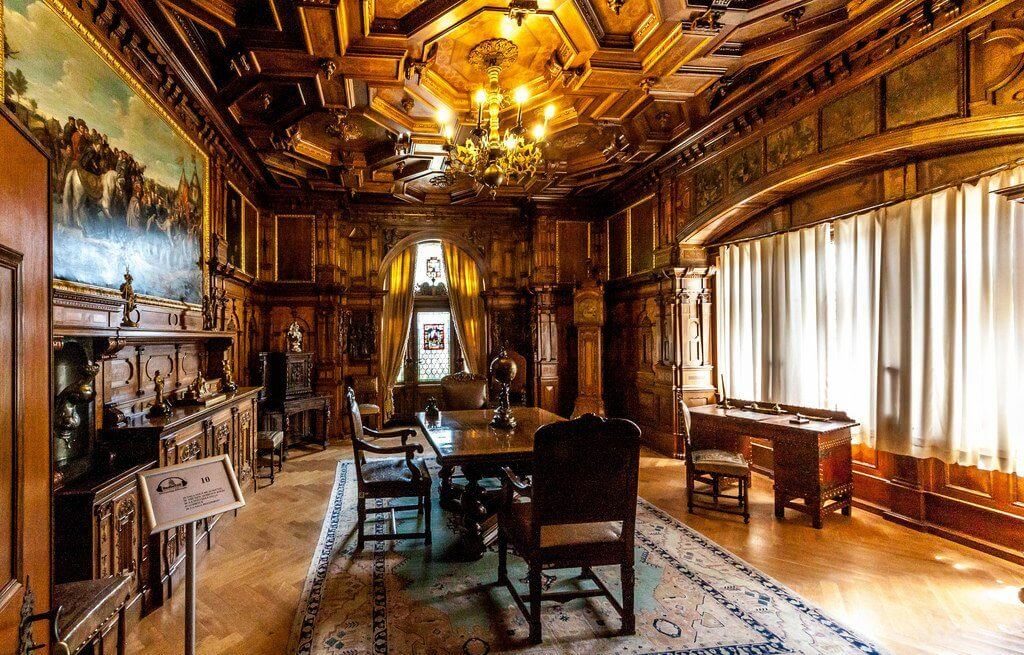 Visit the castle and you will be enchanted with one of the most extensive collections of painting, sculpture, textiles, silverware, and ceramics in Eastern Europe.

At the edge of dense fir forests, surrounded by an amazing landscape with gardens built on terraces, Peles has seen many important historical figures over time, from kings and queens to musicians and writers.

The castle has 160 rooms, several entrances and staircases, a theatre room with 60 seats, a central tower and two smaller buildings: Pelisor and Foisor, just as beautiful as the castle itself.

The oldest civilian building in Sinaia, dating from 1875, Stirbey Castle, former home to princess Alina Stirbey, the daughter of Barbu Bibescu-Stirbey, the Prince of Wallachia and a member of the Bibescu boyar family, witnessed all the dramas and love affairs of this old family. 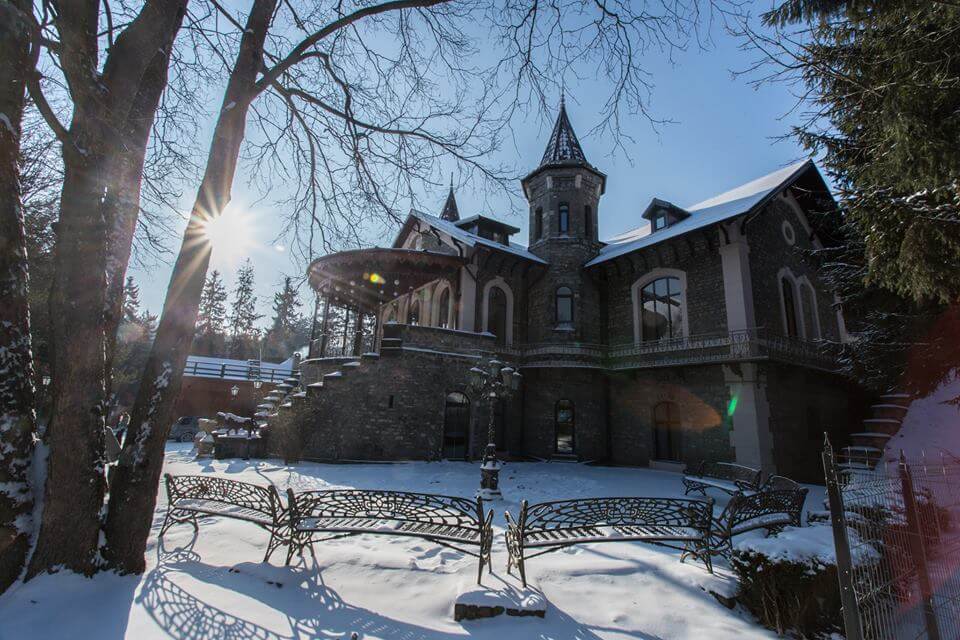 Transformed into the City Museum, the building was designed by the Dutch architect Josef Jacob Schieffleers, who, with his magical touch, managed to create a real castle. Stirbey castle can also accommodate small groups of travellers in its 13 themed rooms.

Known as “The Carpathian Cathedral” and placed in the middle of nature, at the very foot of the Bucegi Mountains, Sinaia Monastery was founded by Prince Mihail Cantacuzino in 1695, and named after the great Saint Catherine’s Monastery on Mount Sinai in Egypt. 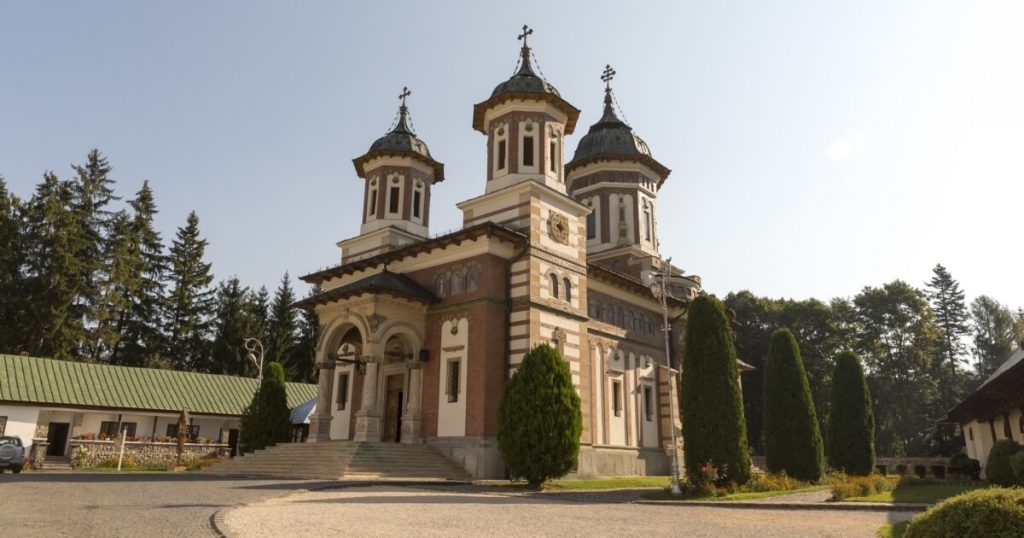 Built in the Brancovenesc style with carved stone columns and decorated with floral and vegetal motifs, the monastery was initially designed to host 12 monks. In time their number grew, so a new wing was added with the “New Church” and additional monk settlements.

Exactly near the railway station, a visit to the Tramway Museum will bring pure joy to your inner child. The museum gathers an extraordinary collection of miniature trains, as well as complex layouts representing railway stations, tunnels, depots, including copies of European well-known railway stations reproduced in every tiny detail, the work of Albero Drera, an Italian artist who fell in love with Sinaia. 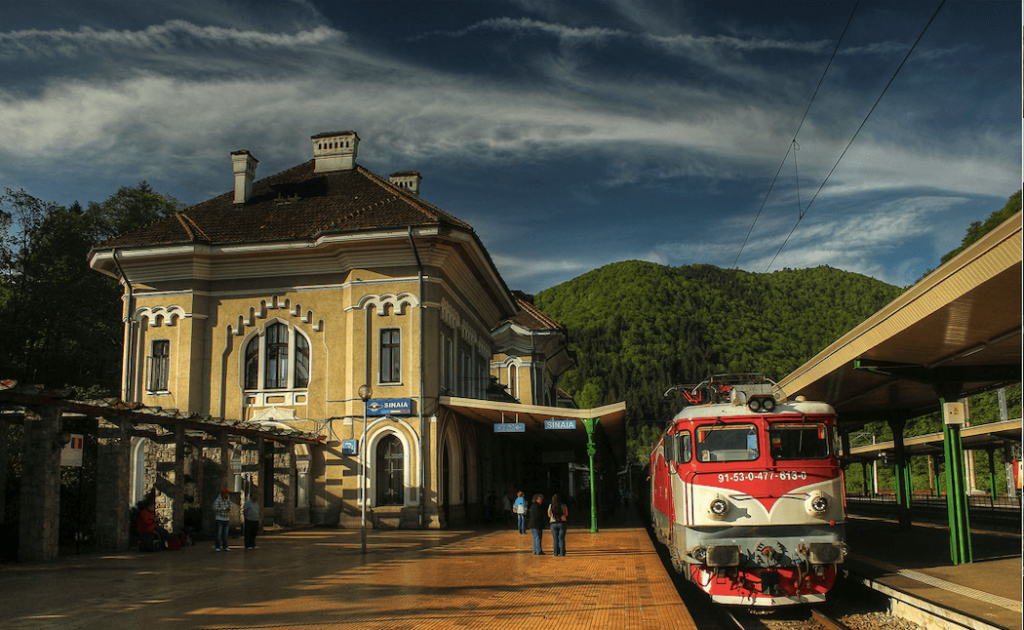 Sinaia railway station, also known as “The Royal Railway Station”, used to welcome every year, and still does, the most famous train in Europe, the Orient Express.

In the middle of Dimitrie Ghica park, built at the initiative of King Carol I of Romania, in only one year (1912-1913), the Sinaia Casino was one of the trendiest entertainment spots between the two world wars. At that time, during weekends, the “trains of pleasure” brought those in love with gambling from Bucharest to Sinaia. 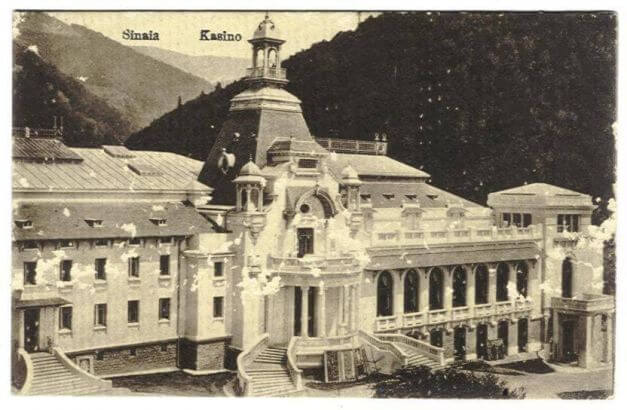 At 4 p.m., when the gambling halls were open, about 800 people were taking over any free place on the tables or at the roulette. In the private salons, however, the very wealthy ones continued to spend very large amounts of money until late at night.

The addiction reached sometimes maximum odds and after huge amounts were lost, very high-interest rates were borrowed. The men were even putting gold watch chains on the table while the ladies were playing their jewels or their furs.

Today, the beautiful building with unique and elegant architecture, a terrace with a great view over the city and the Bucegi Mountains and a splendid interior garden, still recalls the effervescence life from the beginning of the last century. 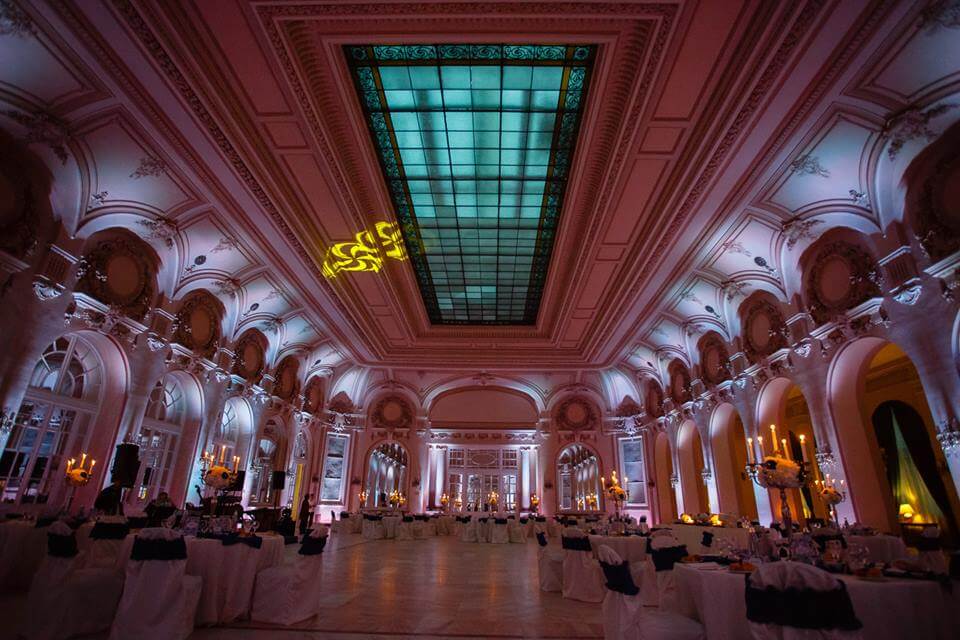 Pay a visit to this romantic Casino and admire The Theatre Hall, the Foyer, the Mirror Hall (the largest hall in the building), which together with its gallery has an area of 650 sqm, the Baccara Hall and the Hall of Prince Dimitrie Ghica, together with private cabinets and other protocol cabinets, like the Green Cabinet, the Baron de Marcay Cabinet, the Queen Mary Cabinet, the Ferdinand and Carol I Hall, where painting exhibitions are organized all the time.

A gondola and cable car trip

If you had your share of historical monuments and royalty stories, you can admire the picturesque city and its surroundings from above, from the cable car or gondola. 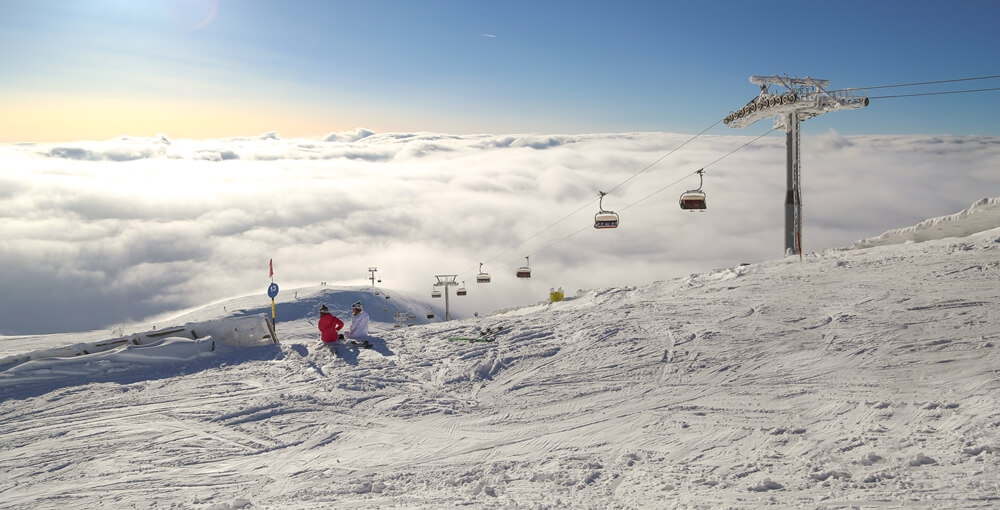 Perfect not only for the professional skiers who prefer to go down from the Cota 2000m but also for all the tourists who want to admire the splendid view of the resort. The gondola has a 2 km route, which connects two important ski areas in Sinaia: Cota 1400m and Cota 2000m. Both on the track and up to Cota 1400m and Cota 2000m, the beautiful landscape will enchant any traveller.

For all the nature lovers out there, The Royal Sheepfold is a place that should not be missed. The trail towards this breathtaking place is easy to follow, sprinkled with many fir trees, little bridges, steep rocks, having as a road partner only the noise of the water flowing out of the mountains and the birds playing cheerfully through the trees. 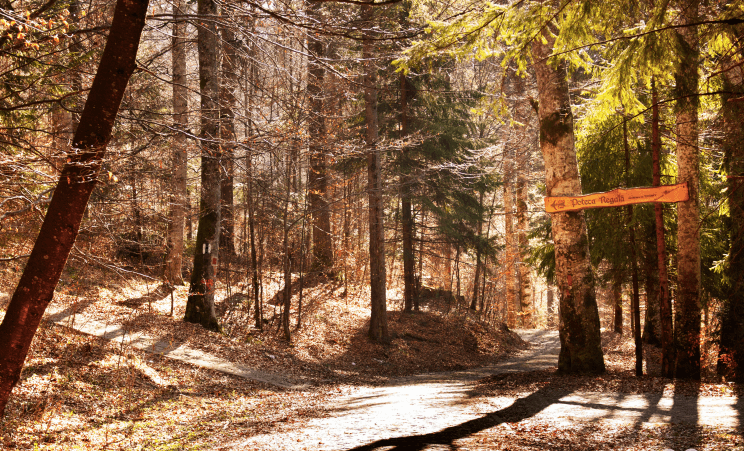 After a short walk, you will find “The Royal Sheepfold”, a big plain with incredible vistas over the Bucegi Mountains, the Small Jepii Mountains and also the Caraiman Cross.

For team buildings, and adventurous travellers there is an adventure park has offering a wide range of outdoor activities like climbing trails, zip line, paintball shooting, archery, paintball in the forest, Jeep safari – self-driving, treasure hunt and many other fun activities.

When it comes to accommodation, Sinaia is prepared to make you feel like royalty. Depending on your taste and budget, you can choose to pamper yourself in a 5 stars hotel, admire the nature from a luxury cottage in the mountains or relax in a picturesque wooden cottage.

Maybe you are in a mood for a Spa treatment? No worries, the city has plenty of accommodation options with fancy SPA centres, with many SPA procedures and treatments.

After you honour your meeting with royalty and finished admiring the colourful, hidden houses and rolling green hills, delight yourself with some comfort food. The Romanian traditional dishes taste better in Sinaia, regardless of where you choose to serve them: modern restaurants, small and cosy terraces or wine cellars with wooden tables and chairs covered with traditional red wipes.

Other attractions near Sinaia

As one of the most famous touristic attractions of the Carpathian Mountains in Romania, Valea Prahovei is rich in tourist destinations. Sinaia surroundings are just as lovely and romantic as this beautiful resort.

You can discover other hidden monasteries, waterfalls, forest trails to and admire the Bucegi National Park.

The legendary Bran Castle is at only 50 km from Sinaia, the medieval Rasnov Fortress, a historic monument and landmark in Romania at only 40 km from the elegant Sinaia.

And if you want to taste a bit of Transylvania, go to Brasov. The city is filled with gothic buildings, medieval watchtowers and gateways, old churches, lively and narrow streets with bohemian terraces and chic boutiques.

If a fairy-tale holiday is on your list, our team is ready to prepare the best royal treatment for you and your friends or your team and organize an amazing trip so you can enjoy the best of Sinaia and its surroundings! Let us FIX your Romanian trip!

How expensive is to travel in Romania?