Brasov or Kronstadt (Crown City) is one of Romania’s biggest and oldest cities in the country. Located in Transylvania, is surrounded by the Southern Carpathian mountains.

Brasov was first mentioned as a city in the historical documents in 1252, under the Latin name Corona or the German name Kronstadt, which means “Crown City”. The Crown is a permanent presence in the city’s logo. On Tampa mountain, there was an old fortress called Brassovia, which was the inspiration for the later name of the town established at the foot of the same mountain. Traces of settlements from the Stone Age, as well as traces of Dacian fortresses, were discovered in the area.

The city was founded by the Teutonic Knights in 1211 to defend the border of the Hungarian Kingdom, and it was colonized by the Saxons of Transylvania, becoming one of the seven fortresses known as Siebenburgen. The German colonists left their marks on the Gothic, Baroque and Renaissance town’s architecture.

Due to the beautiful natural landscape, its surroundings and the multitude of the historical attractions, Brasov is one of the most visited places in Romania and a preferred destination for business and incentive travel. Furthermore, being in the center of Romania, Brasov is a very good starting point for traveling throughout the country, all year round. 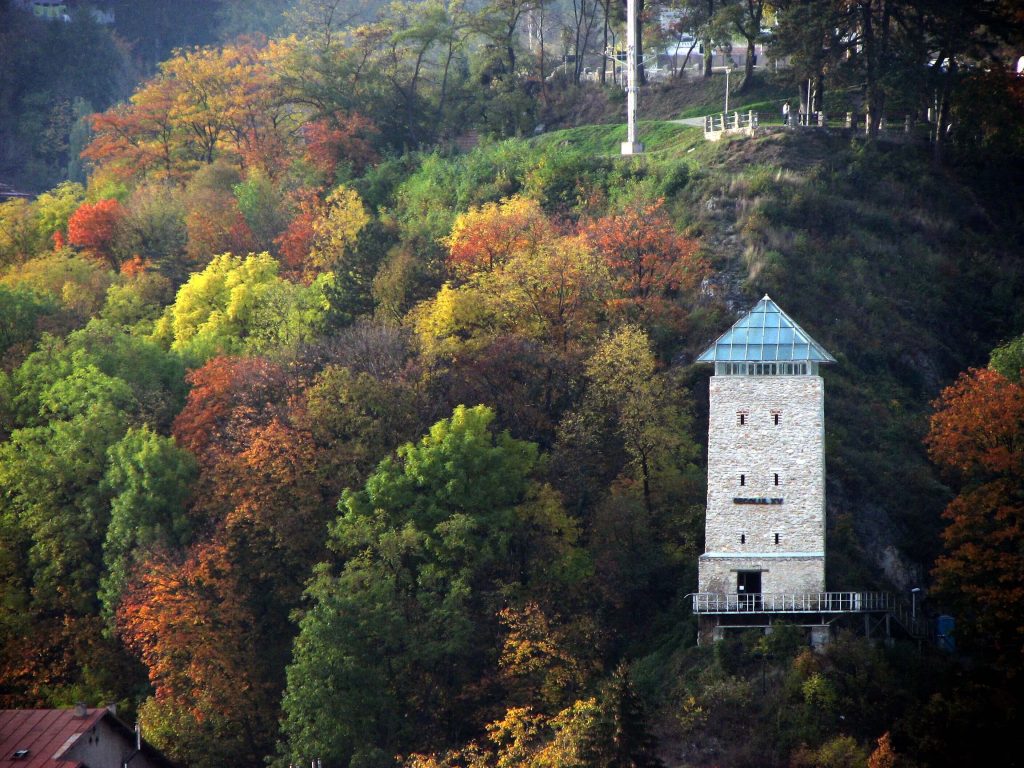 Brasov was one of the most important cities of Transylvania during the Middle Ages dominating the economic life of the 14th-16th centuries. According to the oldest act of the State Archives of Brasov dating in 1353, the commercial activity in this area was flourishing. Brasov was famous for the quality of the goods, but especially for the weapons produced here. The strong guilds, among which were the goldsmiths, the weavers, the builders, the armies, the ironmonger, the jeweler, the tinsmith, made Brasov not only a transit point but a thriving craft center.

The city was built according to the highest standards of that time, the walls of the fortress, the bastions, the defense towers being complemented by warehouses, markets, workshops, statues, inns, churches, hospitals.

Many of the most beautiful monument buildings were built in that time, such as the Black Church, The House of Council, churches and bastion towers.

The Black Church is the largest Gothic-style edifice in South-Eastern Europe, measuring 65 meters tall, 89 meters long and 38 meters wide. The church received its name as a result of the fire in 1689 when it was partly damaged and the walls turned black. 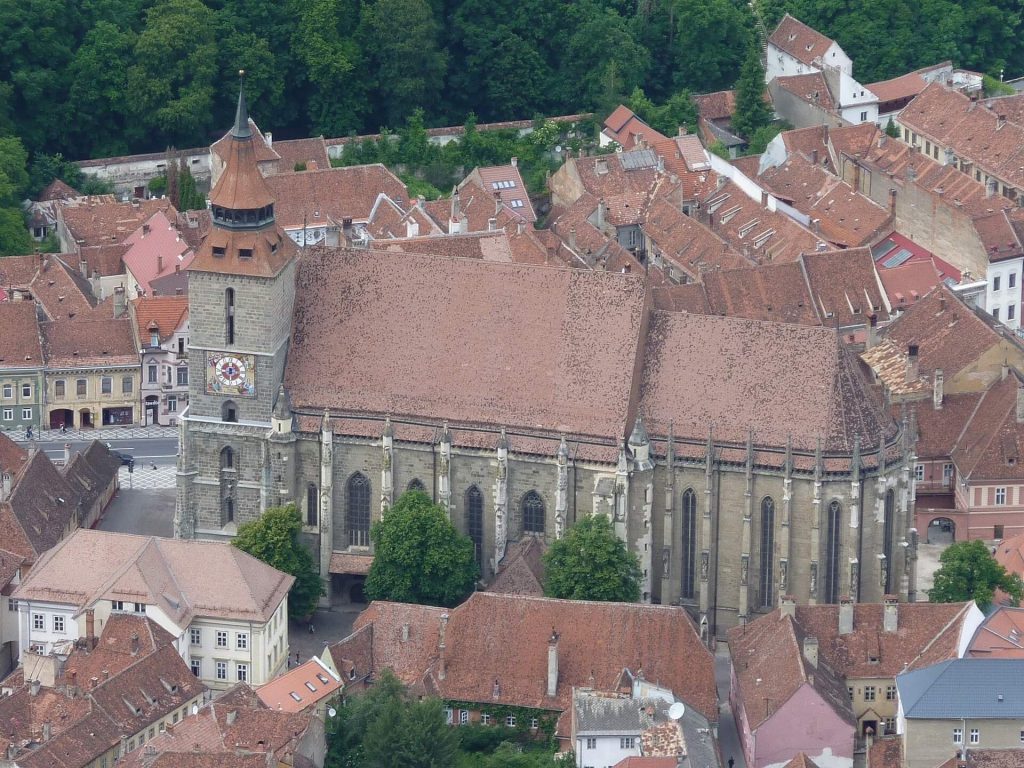 The church is famous not only for its size, but also for the largest bell in Romania, a bronze bell built in the 19th century and weighing 6,3 tonnes. Another unique piece is the Buchholz organ, which is almost 200 years old. The excellent acoustics, the collection of oriental carpets and precious art objects make this edifice a top tourist attraction in Transylvania. 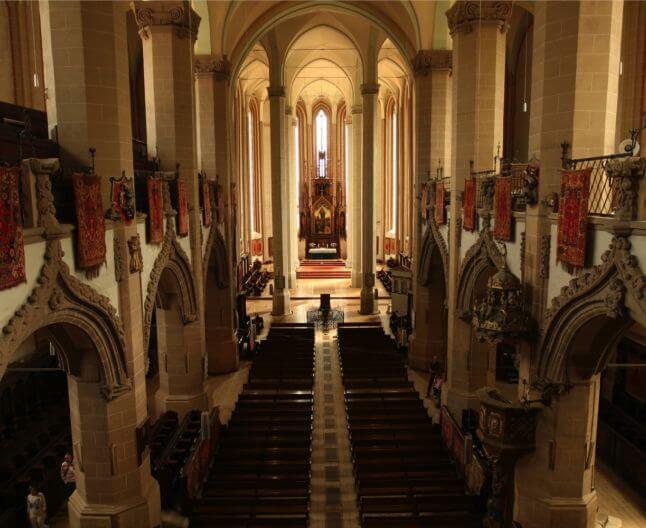 Piata Sfatului, the Council Square or the Old Market, is the heart of Brasov and the place of the most important artistic and cultural events. Here you can admire and visit the Council House. The former Town Hall has an impressive history. It dates back to 1420 and survived the earthquakes, fire, but also the communist era. 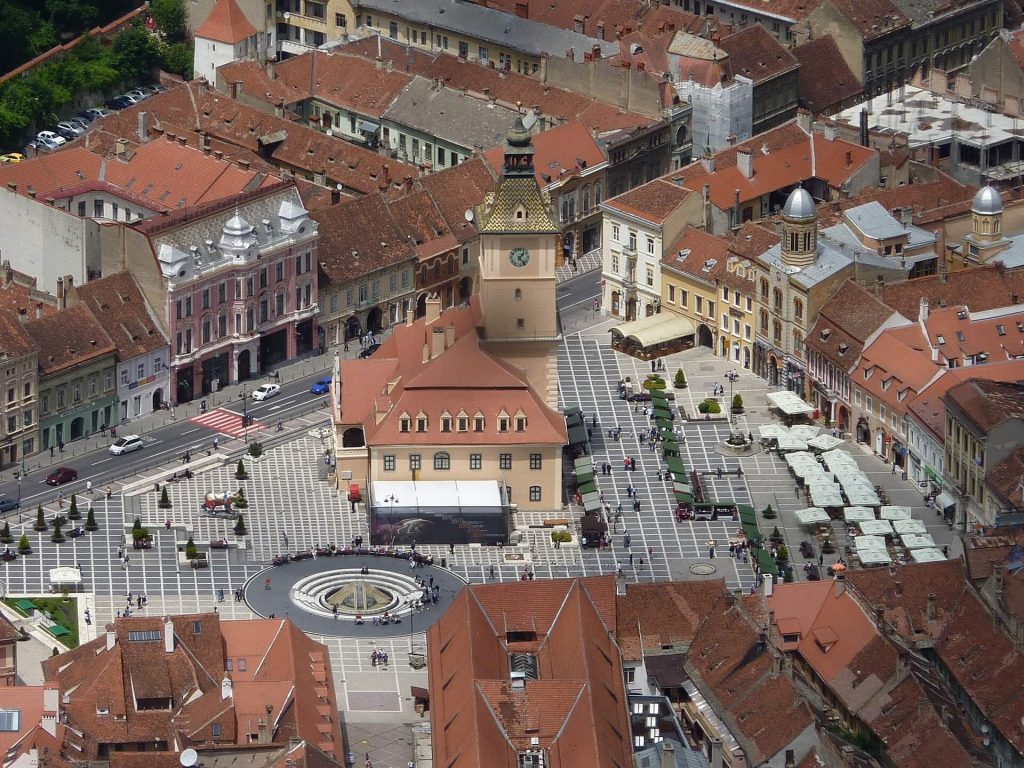 Some historians claim that underneath the square is a network of tunnels. Three of them would lead to the Black Church, and one would go right under Tampa mountain. Historical researches could not accurately confirm the tunnel map, but it is clear that they have existed, as there were some entrances in the tunnels in the town but they were blocked over time. Most likely they served as a refuge against the attackers, storage for supplies and town’s riches. 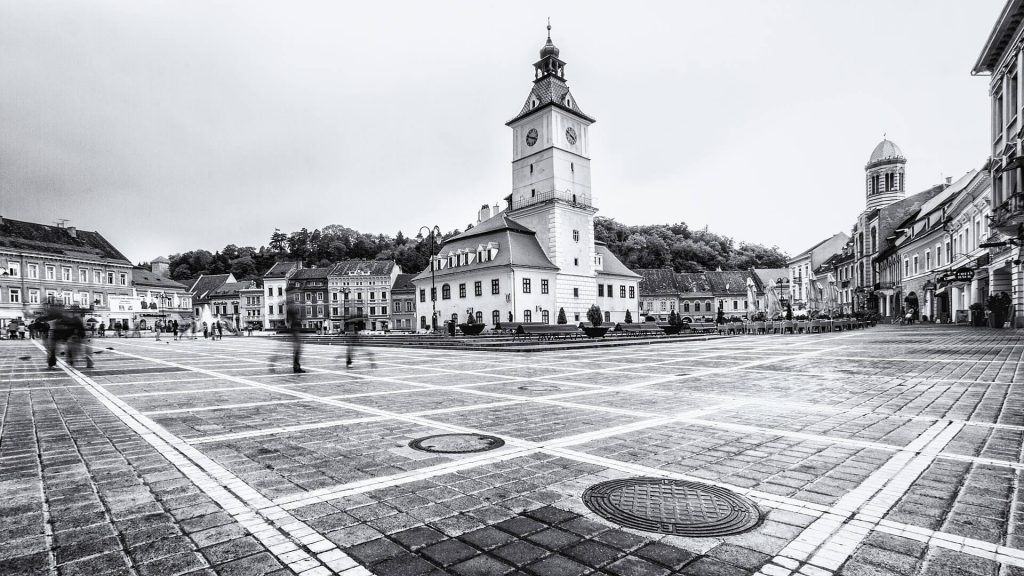 Another less known thing is the fact that in the Middle Ages the square was used as an execution ground. Justice was divided in the House of the Council. The place for the executions was in the square, where the artesian fountain is now. The convicts were executed by different methods according to their social status. The common citizens were beheaded, the thieves were hanged and the witches burned. 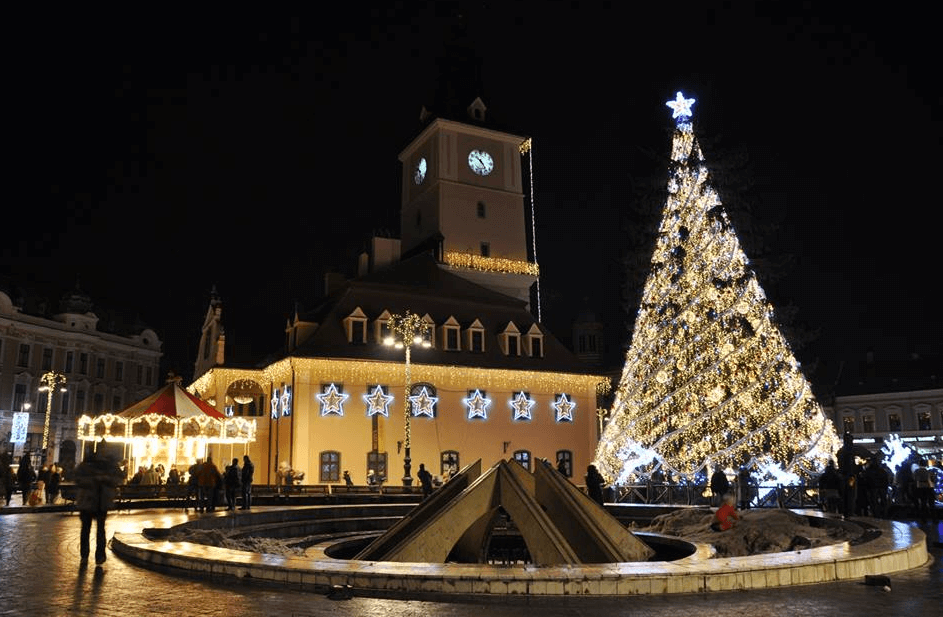 The Bartholomew Church is the oldest building in Brasov, since 1223, after the Teutonic Knights established in Barsa country. The church was known as the “Church of the Three Orphans” who were supposedly buried under the altar. The evangelical church serves today as an ethnographic museum, exhibiting over 1500 objects donated by the German emigrants. These are representations of the traditional Saxon household: traditional clothes, tools or furniture. 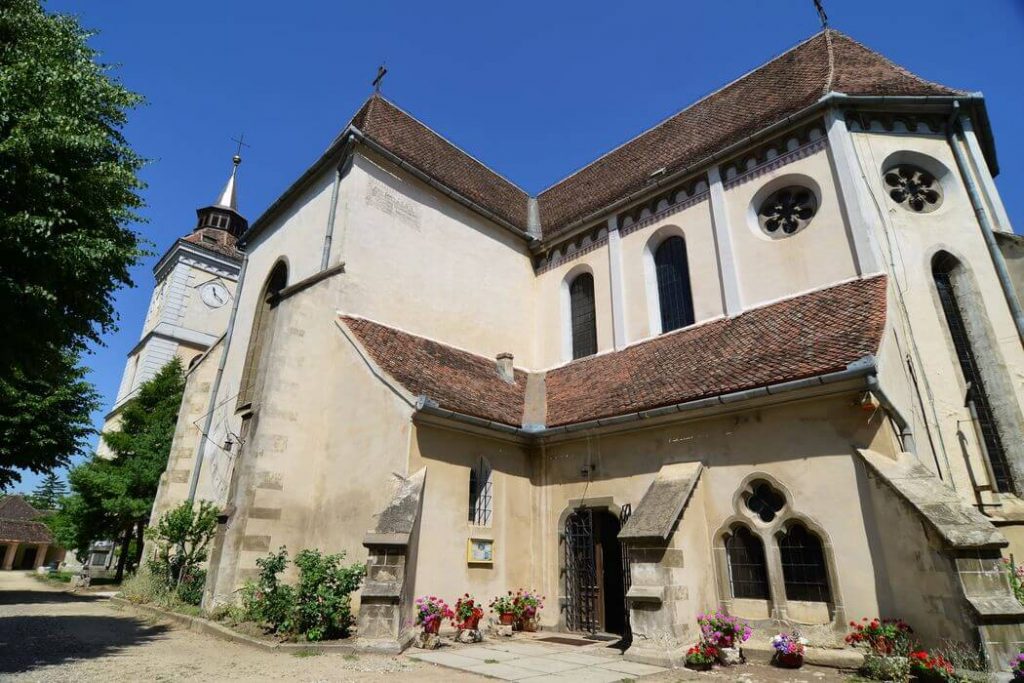 The first Romanian school in Brasov, dating since 1495, still exists in Saint Nicholas Church’s courtyard. The first lessons in Romanian were taught in 1583. Today the building is a museum owning about 4,000 old books and more than 30,000 documents. The Saint Nicholas Church is an orthodox one, built with strong gothic influences. With time,  it was transformed into a beautiful monument with a baroque architecture. 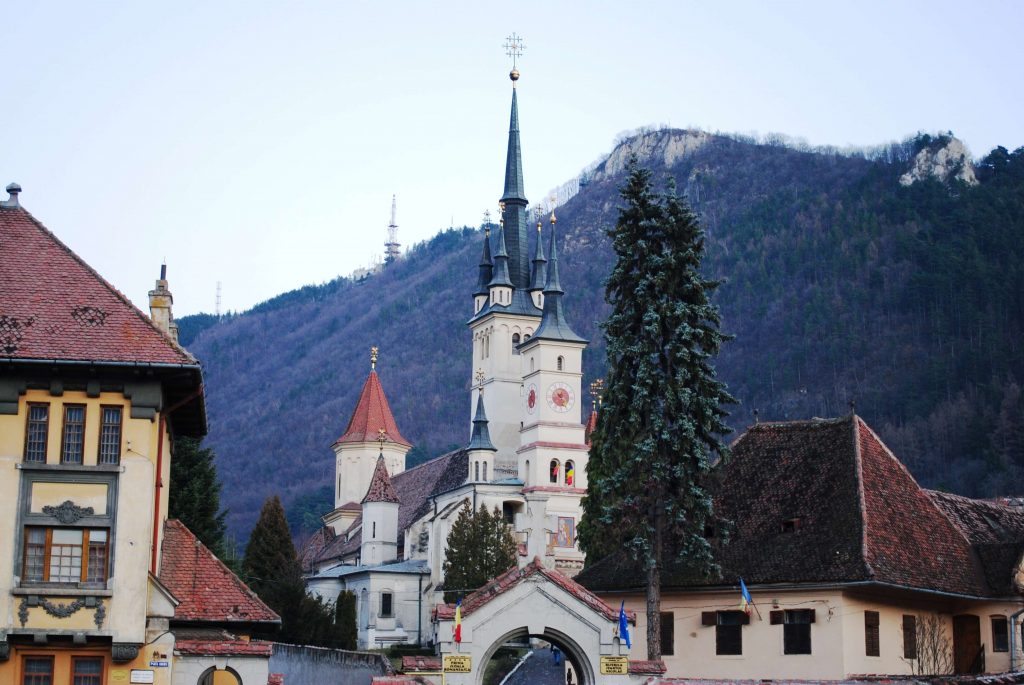 The White and the Black Tower. The white tower was part of Brasov’s fortifications, the highest in the city, built with a defense purpose and maintained by 2 guilds which produced weapons. The Black Tower was designed as an independent fortification, being one of the four observation towers of Brasov citadel. The tower survived 2 fires caused by lightning, thus receiving its name. 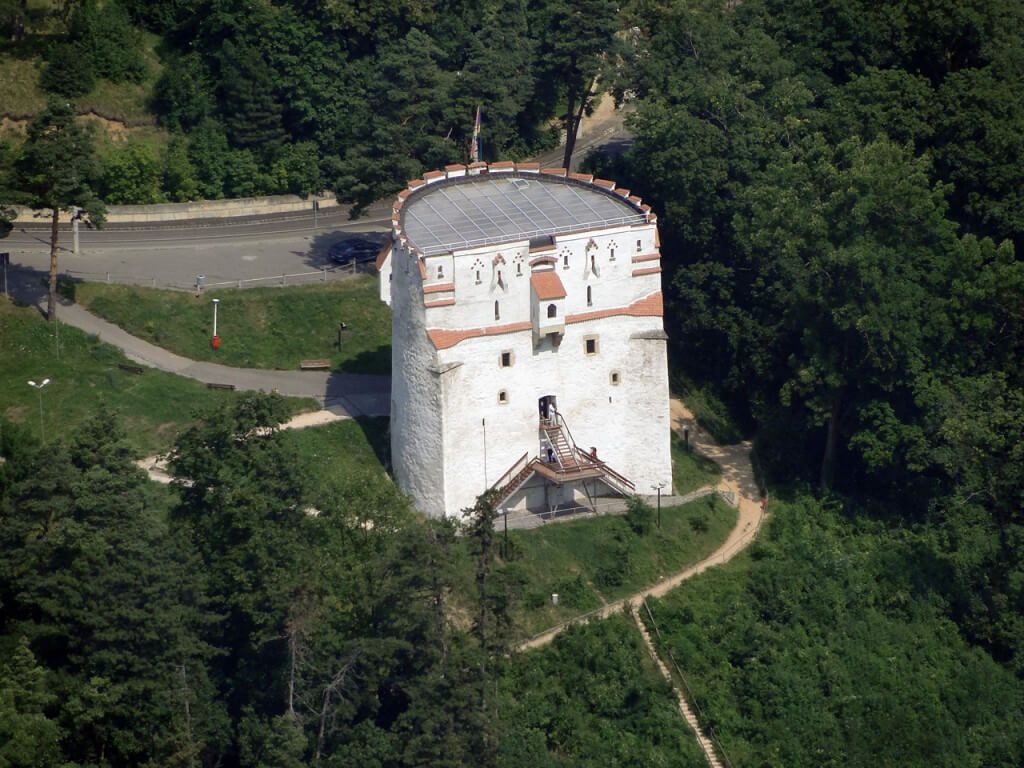 The Bastions were built since the 15th century to strengthen the city’s defense capability. They were located outside the citadel walls in strategic points and had different shapes. A 15th-century document indicated that the fortress of Brasov had 7 bastions. Bastions were entrusted to the most important guilds of the city, whose names are assigned to them. The guilds were responsible for their maintenance in peacetime and serve them in case of attack. Six of the bastions are in perfect condition to receive visitors, hosting temporary or permanent historical and cultural exhibitions. 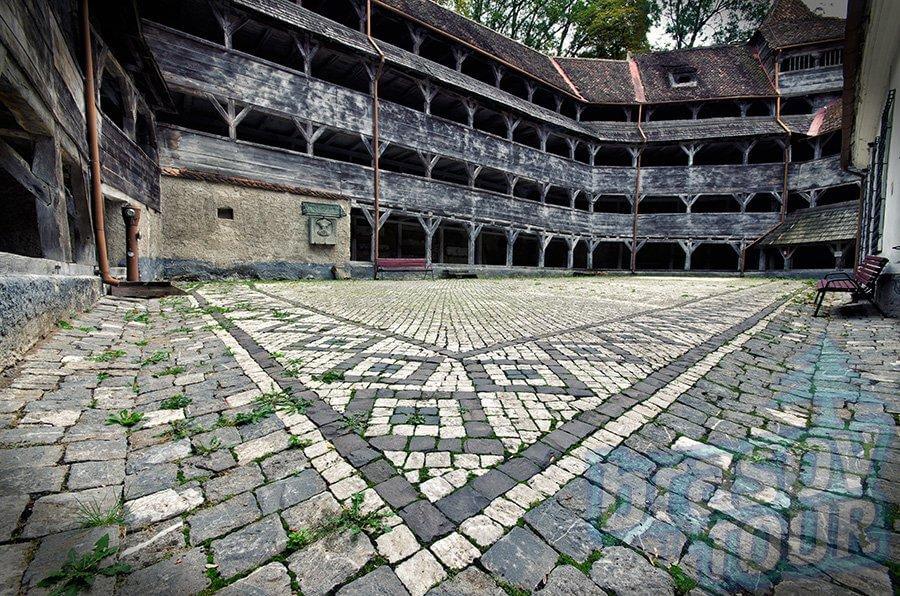 The Tampa nature reserve is the only landscape reserve in Braşov county and has an area of 188 hectares, covering almost all the mountain.

The entire area is protected, due to its flora and fauna. Around 35% of the total variety of species of birds and animals in Romania can be seen here: 975 species of butterflies, rare wasps, birds, brown bears, wolves, lynx.

Hikers have three options to reach it: “The Rabbit” road, which starts in the fortress’ valley or the 25 serpentine made in 1837 by the forest service or the Knights’ Road, from Scheii Braşovului, the old part of the city. However, the easiest method is the cable car that takes only a few minutes to the top of the mountain and breathtaking views over the city. 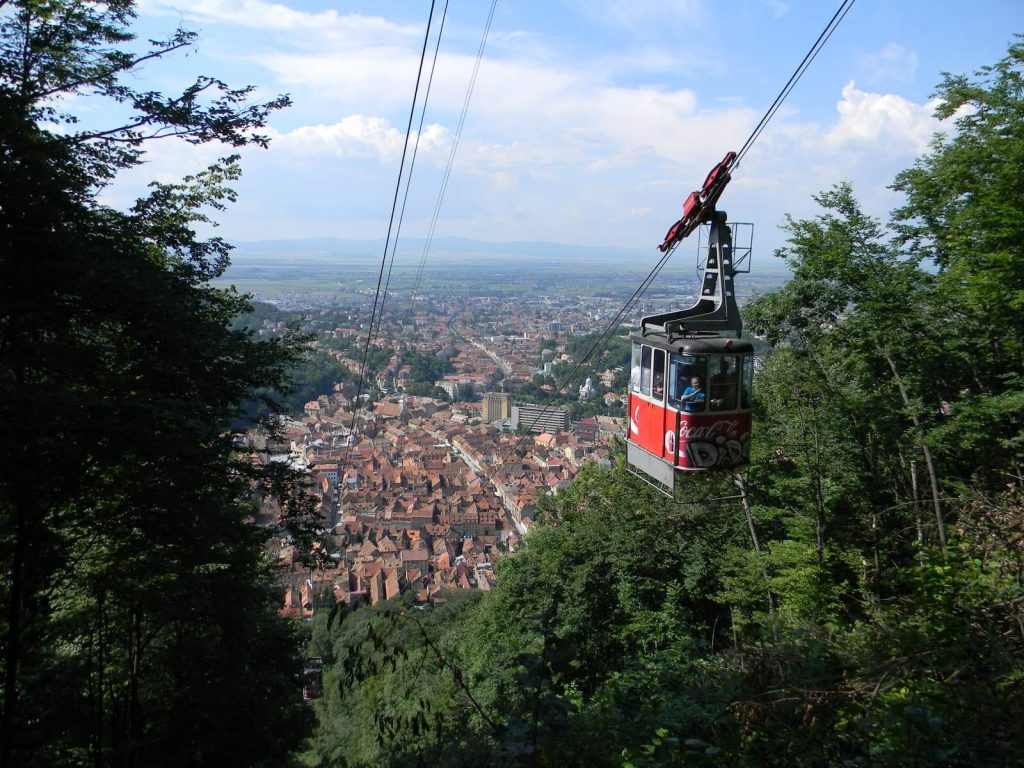 At only 10 km from Brasov is the 7 Ladders Canyon, the biggest in Eastern Europe formed by 7 waterfalls. It’s the dream of every hiker, a stone formation dating back to the Mesozoic. You can walk on the bottom of the old Theus sea, the same where dinosaurs lived a long time ago. The bottom of the canyon, which is yellow, dates from the Jurassic, and its top from the Triassic. 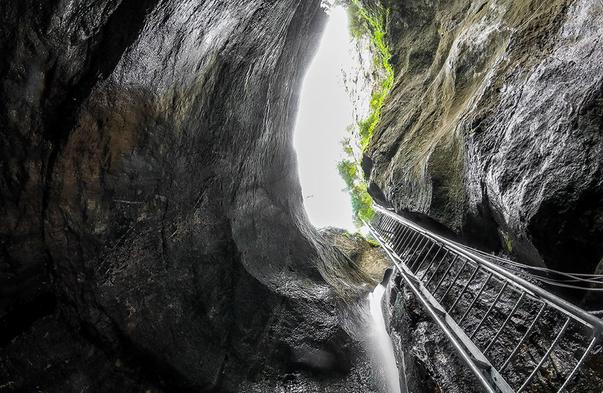 The spectacular landform, the ridge of Piatra Craiului mountain, the Zarnesti Gorge, the Brusturet Gorge, Dambovicioara cave and Bear caves, the rich flora, the diverse fauna and the impressive landscapes make Piatra Craiului National Park a fascination corner of the natural world. 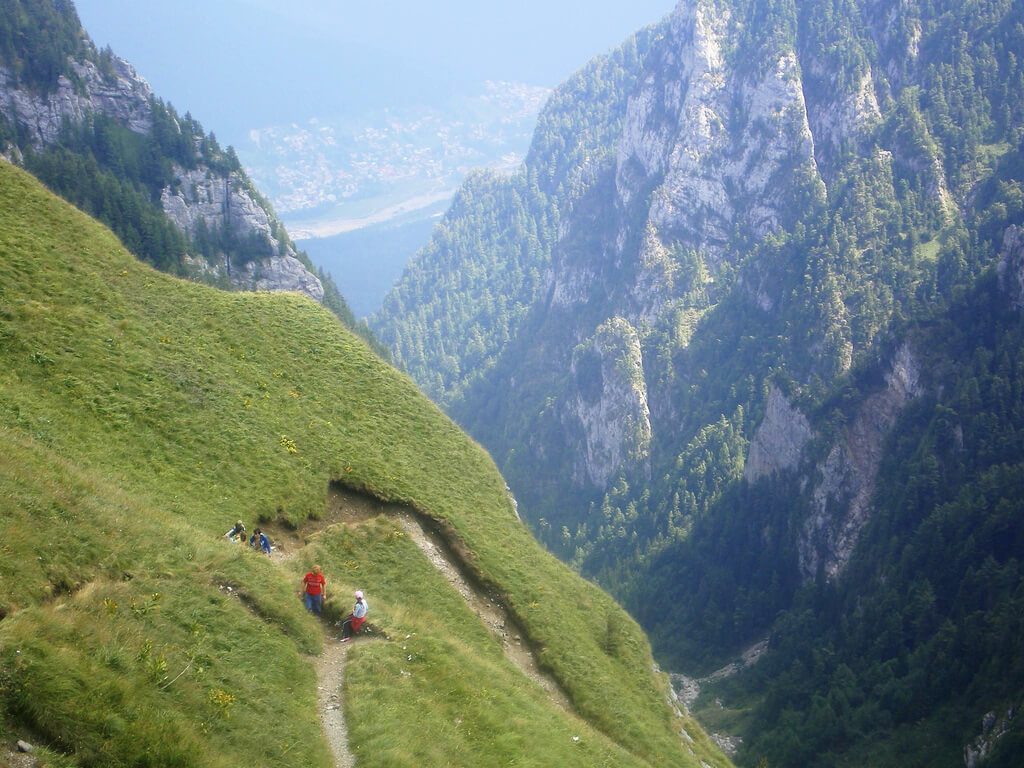 The Daffodil Glade is a natural reserve of 400 hectares, made up of oak forests, glades and valleys that are abundant in daffodils during springtime. 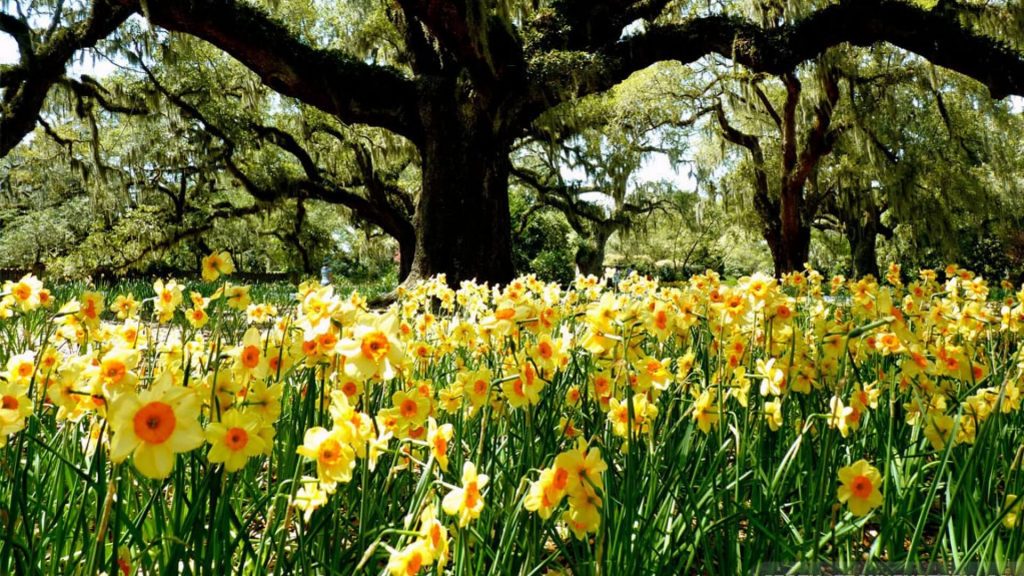 Poiana Brasov (the glade of Brasov) was a destination for hiking and winter sports since ancient times. The skiers first climbed Postăvarul mountain in 1895, and in 1906 the first ski competition was held here. In 1951 Poiana Braşov hosted the Winter University World Games.

Poiana Brasov is also one of the most important centers of preparation for the Olympic sports in Romania. Filled with modern sports and spa hotels it’s a favorite ski destination during winter, as it has the best ski slopes in Romania, and a trekking, biking and hiking destination in the summer. 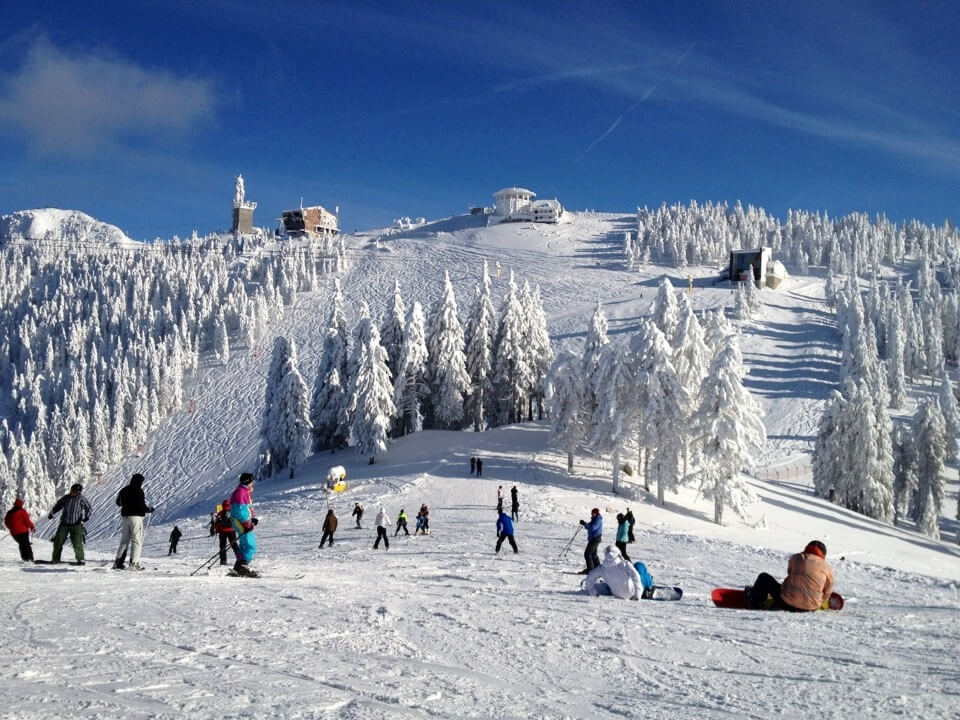 If you prefer to relax after a long walk or hike Brasov and the entire area is packed with spa, wellness, detox and yoga resorts, 4 and 5 star big hotels, small boutique hotels and guest houses. The countless options of accommodation and Brasov’s proximity to Bucharest and Sibiu airport make it a preferred destination for meetings, incentive travel, international conferences, exhibitions and team buildings in Romania.

From Brasov, you easily reach Bran to visit the famous Dracula’s castle or discover the beauty of the Saxon villages, their fortified churches and even sleep at HRH Prince of Wales retreat. There are countless options of where to stay and what to do no matter the season or the weather. 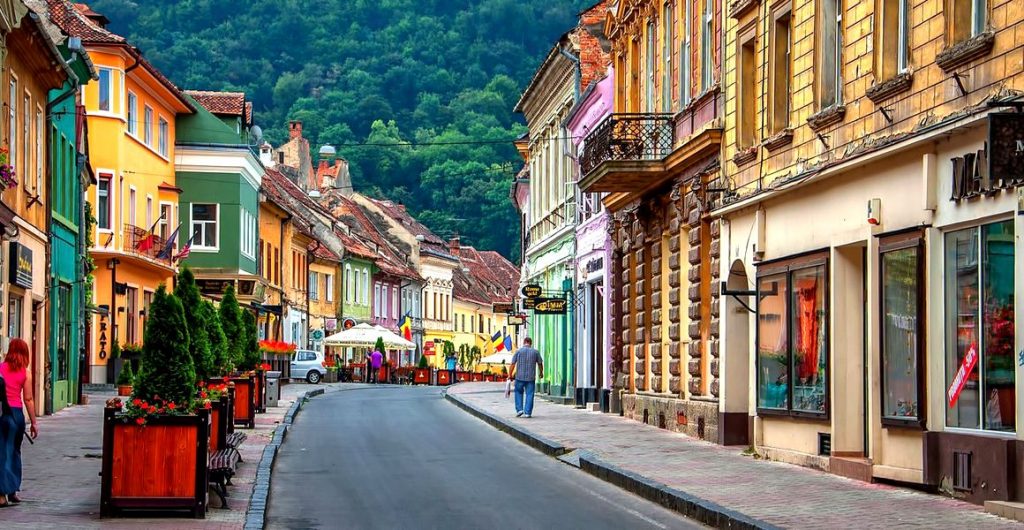 Brasov is a city that keeps alive its tradition and ancestors customs. Its visitors enjoy they frequent celebrations (performances, fairs or festivals). One of the best-known events celebrating a local tradition is the Young Men Parade, which takes place every year on the first Sunday after Easter. 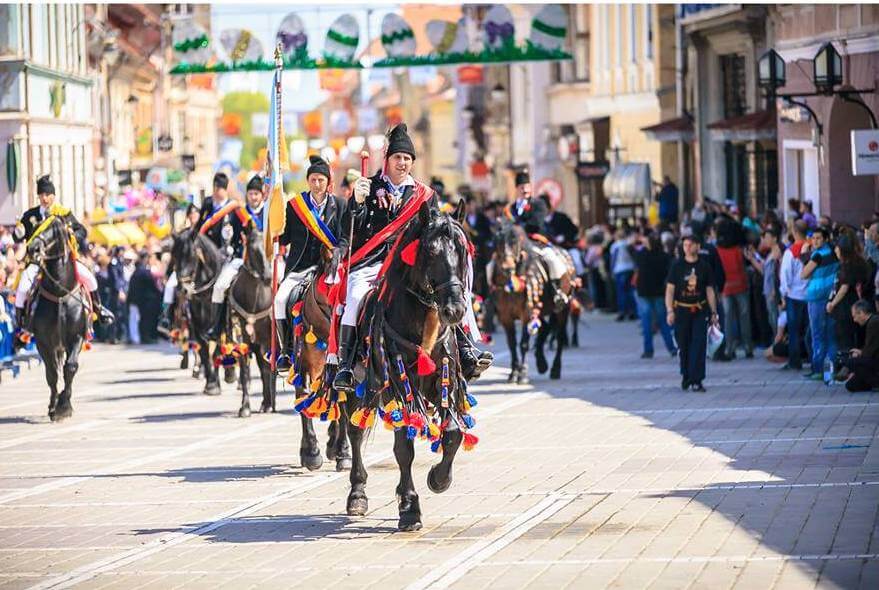 If you want to the taste the traditional Transylvanian cuisine, Brasov offers you many traditional restaurants, both in the city and Poiana Brasov. 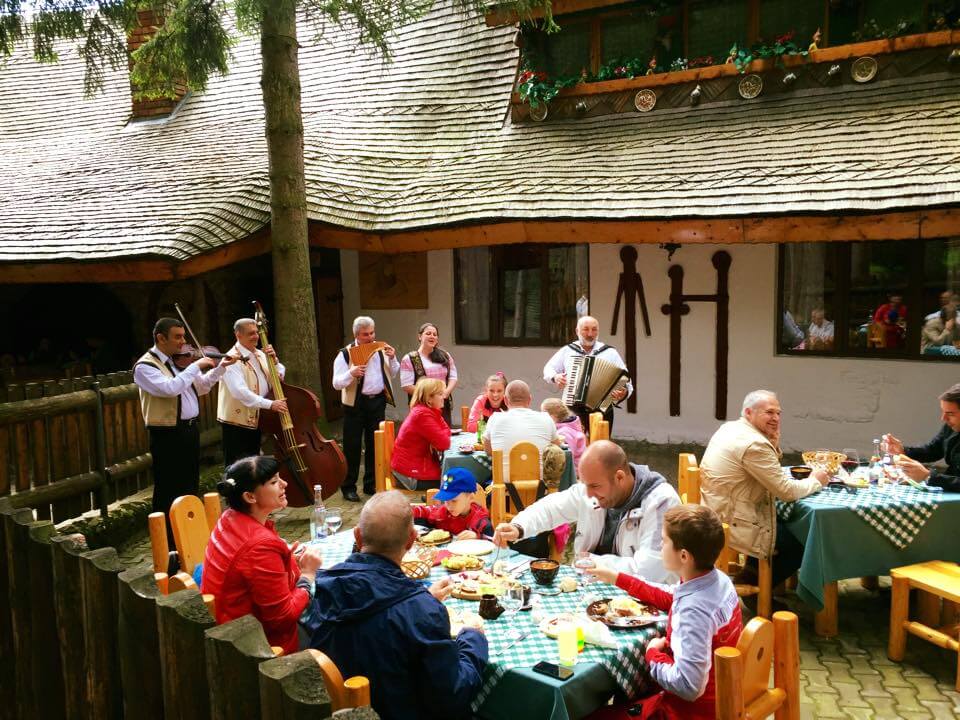 From Romanian and Hungarian cuisine to recipes with Saxon or Mediterranean flavors and even Mexican or Japanese cuisine, Brasov might surprise you. The haute cuisine restaurants are usually in the high-class hotels and their kitchens are led by famous chefs, including the only lady chef in Eastern Europe. 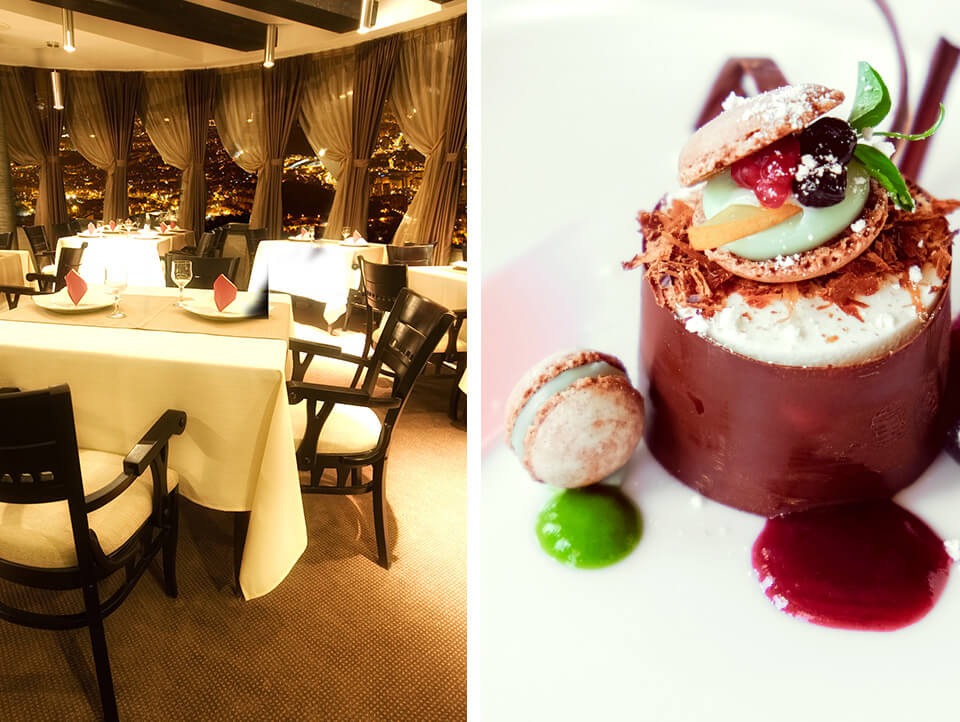 Brasov it is also known for its large and artisanal local beer production which is perfectly fitted to the delicious spiciness of the local food. 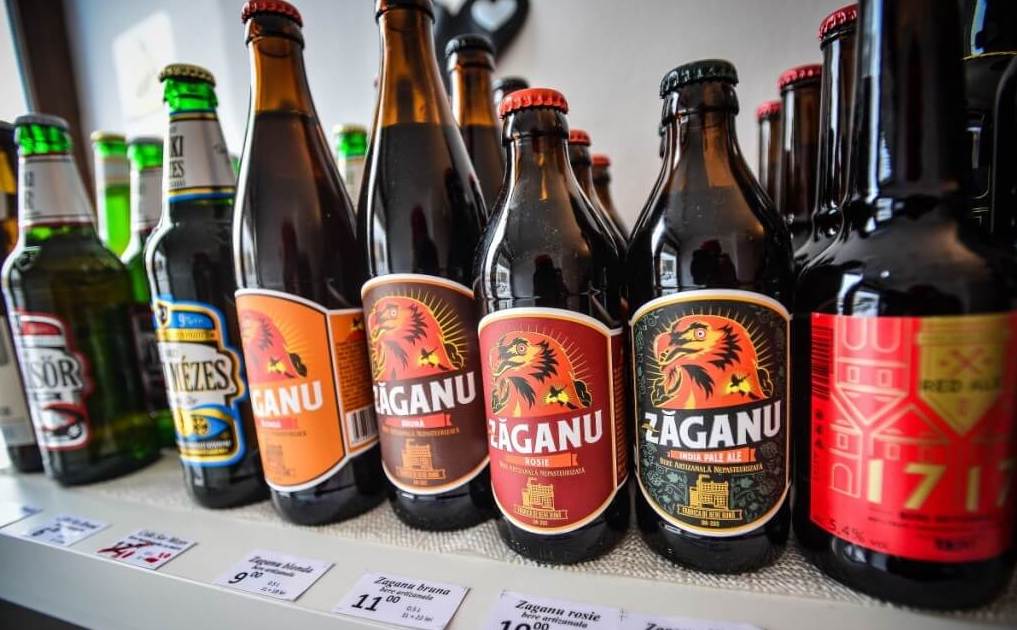 The deserts are also an ideal mix between the Romanian, Saxon and Hungarian best recipes: pastries, cakes, fruity fillings, nuts, cinnamon and even raw-vegan delights will tempt you with their savor from the street corner to the highest rated restaurants. 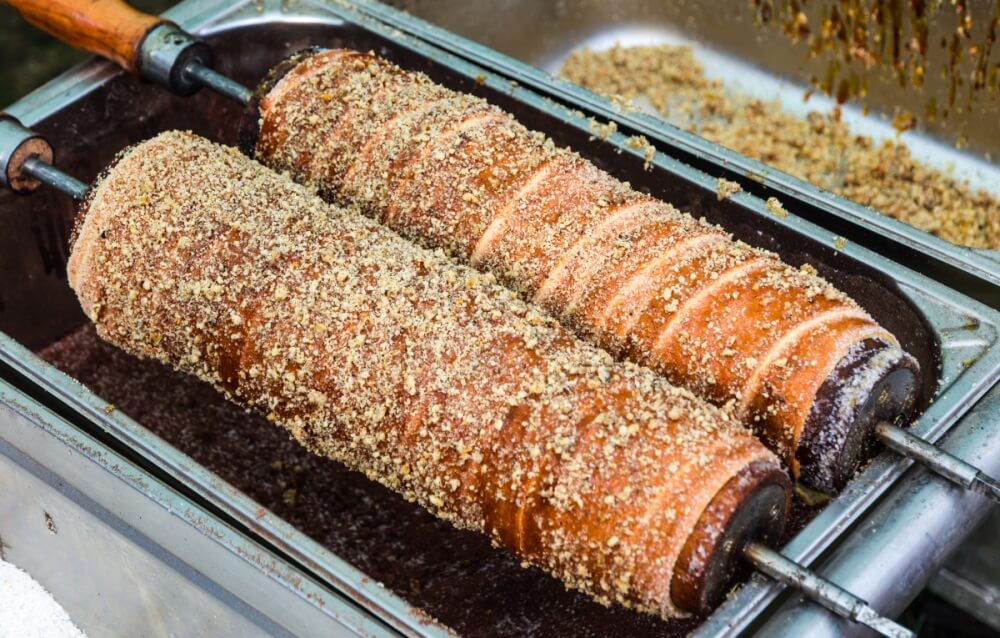 Either used as a gateway into Transylvania or as a destination itself, Brasov will not disappoint. Fix Travel, a leader in destination management in Romania will help you experience the best of the city, its surroundings, and Transylvania according to your preferences, schedule, goals and budget. Visit Romania with Fix Travel!