Bucharest aka “The Little Paris” is sprawled with palaces and manors, heritage buildings, some of them forgotten by people and time. Unlike the castles that are built in the countryside as fortresses and designed to defend their noble inhabitants, the palaces are urban residences built with the utmost care for the aesthetic aspect and the functionality required daily by their inhabitants.

Though many wonderful palaces of Romania have perished in time, there are still some wonderful buildings that have survived the plagues of all kinds: wars, fires, earthquakes, and communism.

For a business event of any kind, the venue is very important. No matter the purpose of the event- board meeting, conference, company celebration, exhibition, product launch, team building or gala dinner-, the attendees of an event are just as interested in the location/region as much they are interested in the event itself.

FixTravel&Events specialists always recommend to carefully chose where to hold your event as it can draw more participants and it can be used as a way to generate excitement for attendance. Furthermore, a palace is not the usual venue, its offers prestige and a certain grandeur, unavailable on a daily basis for the most of us.

Bucharest is a great Eastern Europe destination for business, incentive and group travel, as it owns palaces and manors suitable for small or big events, plenty of accommodations options, things to see and do and a thriving business community.

Fix Events specialists have gathered a list of palaces in Bucharest and the surroundings, which can host any type of event:

The Colentina estate was the residence of the Ghiculesti boyars, whose family gave for two centuries – starting the middle of the 17th century- no less than nine rulers both for the historical regions of Walachia and Moldova. 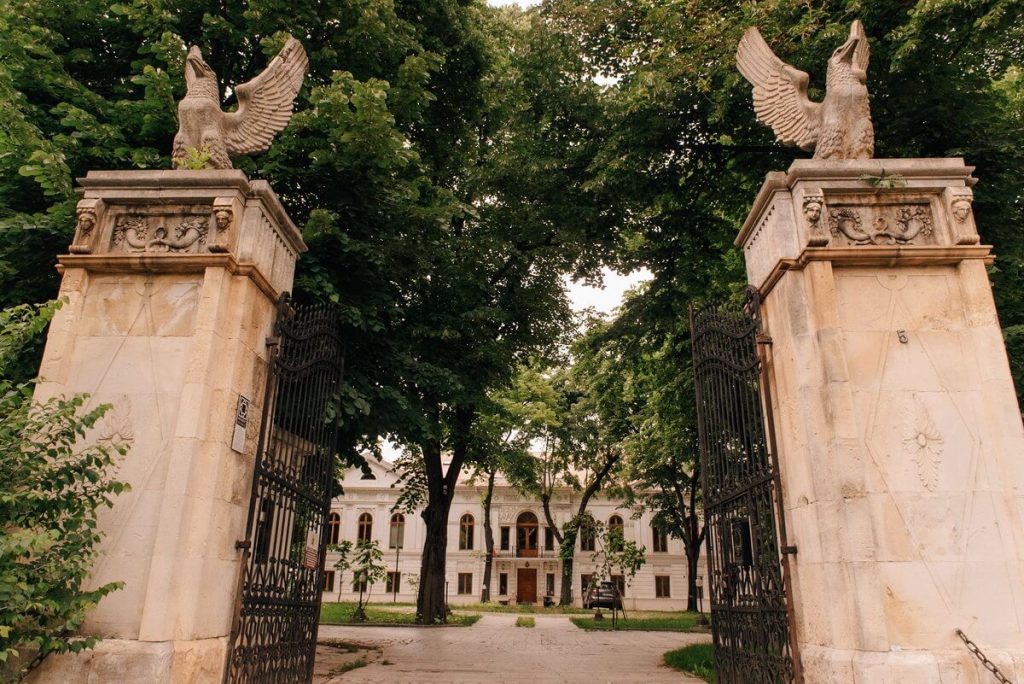 Grigore IV Ghica, the first Romanian ruler of the Walachia named by the Turks after the removal of the Greek governors, establishes his royal residence on his parental estate of Colentina (today a Bucharest district), where he arranges the construction of a new palace for himself. The palace built in neoclassical style mirrors the changes of the Romanian boyars’ vision and aspirations, the orientation towards the Western models and the swerve from the traditional Turkish-Byzantine values. The construction of this palace(1822) and the Ghica Church(1833) reflect through their architecture the profound westernization phenomenon that occurs at the beginning of the 19th century, with echoes in art, architecture or fashion. 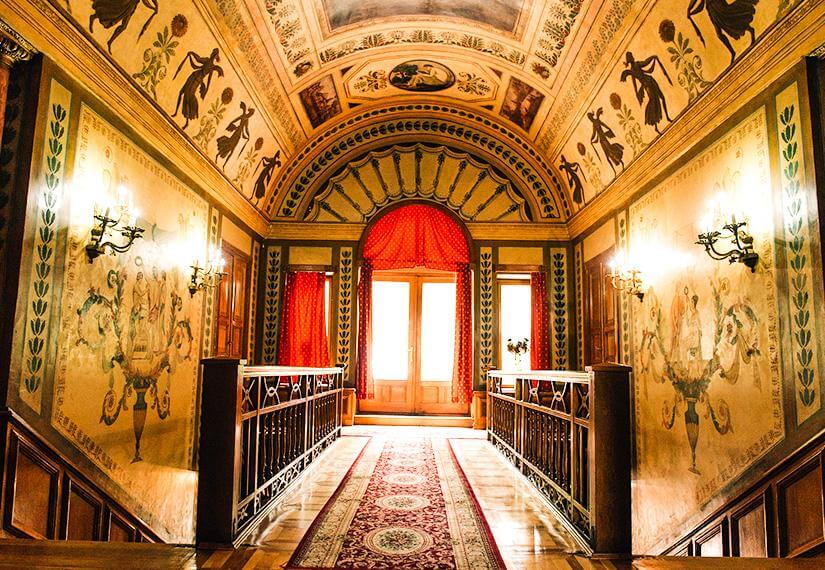 The palace stretches over a vast area, occupying about 1,000 sqm, and its land(annexes, courtyards, gardens, alleys) measuring over 11,000 sqm. It also has a one-kilometer long escape tunnel that connects the palace to the Plumbuita monastery. The interior of the palace, made up of spacious salons can host events up to 700 people. 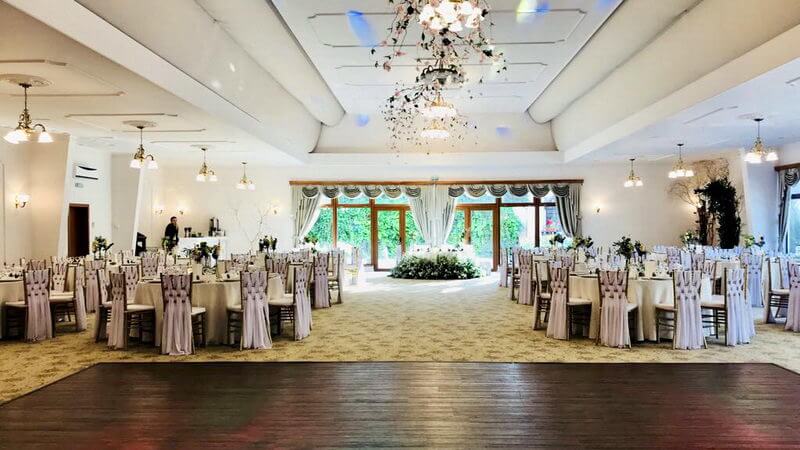 There are also 2 intimate Venetian courtyards, a private terrace and a generous exterior garden suitable for outdoor events. 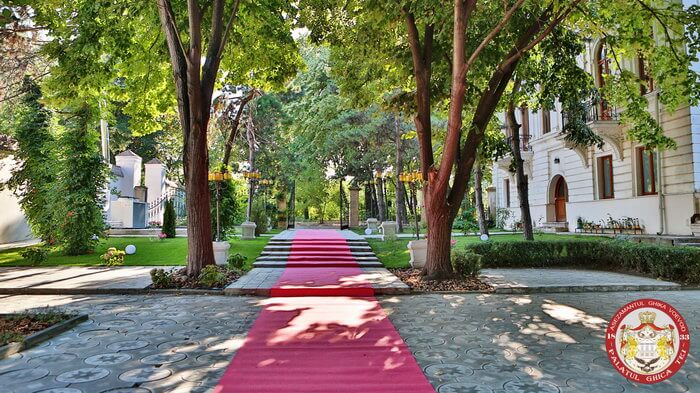 The entire domain is named after its founder, Dumitru Marinescu Bragadiru. Born in 1842, in a poor family with many children, Dumitru Bragadiru began working as an apprentice at a young age in the establishment of the merchant Iancu Ştefănescu. As he proves to be diligent and honest, he soon becomes the trustworthy man of the associate. And in 1866, Iancu Ştefănescu leaves him his whole business. In time, he bought a 10 hectares plot of land, wherein 1895 he raises a beer factory. In 1901, the Bragadiru brewery has the latest technology available at that time and produces about three million liters of beer, surpassing its competitors. 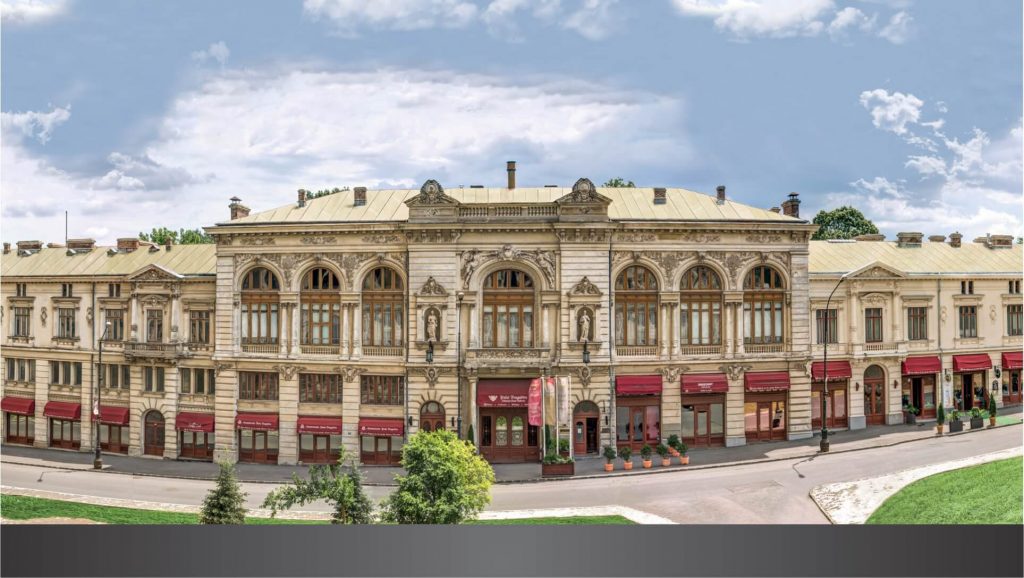 He started the construction of the “Giant”, as it was known in that period, around 1905. Designed as a palace of culture, this building respects an old tradition of breweries, to have a recreation place in the immediate vicinity, for the people working in the industry.

The Bragadiru Palace was built according to the plans designed by the Austrian architect Anton Shuckerl in 1894. It is an impressive building, both in size and architecture, beautifully decorated. The Summer Garden and the terrace harmoniously complement the palace. 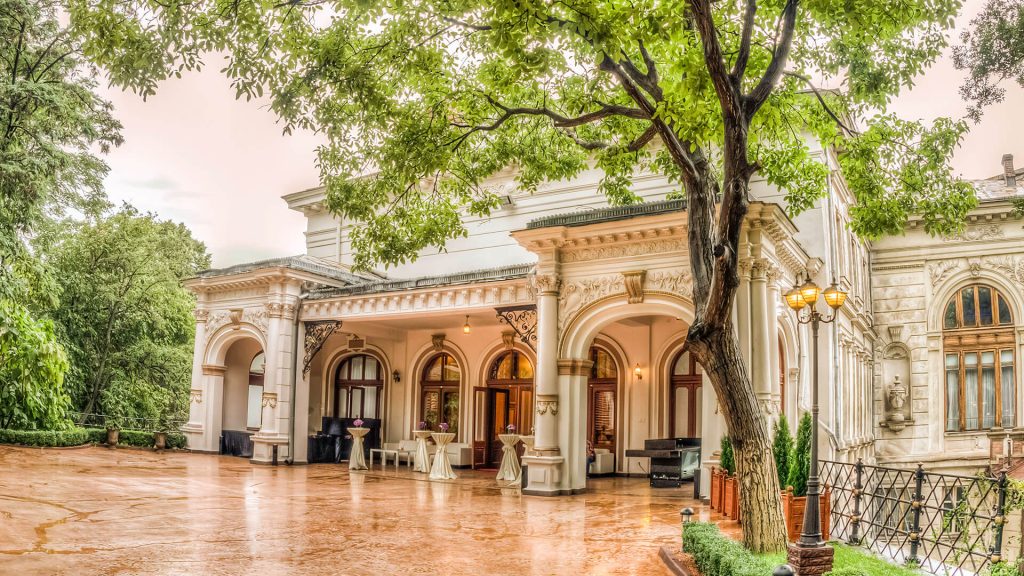 The Bragadiru Palace is today an exclusive location in the center of Bucharest, with an area of 16,000 square meters, which can accommodate a wide range of events, from festive meals with 400 guests to receptions of up to 1,000 people. In addition to the ballroom, the palace has an impressive garden, in size and decor, which can become a space with endless possibilities for landscaping. Bragadiru Palace remains one of the most imposing constructions of Bucharest and a wonderful venue in the middle of the city.

This palace is one of the most romantic palaces in Romania and is located in Mogosoaia, Ilfov County, at 15 km from Bucharest center. 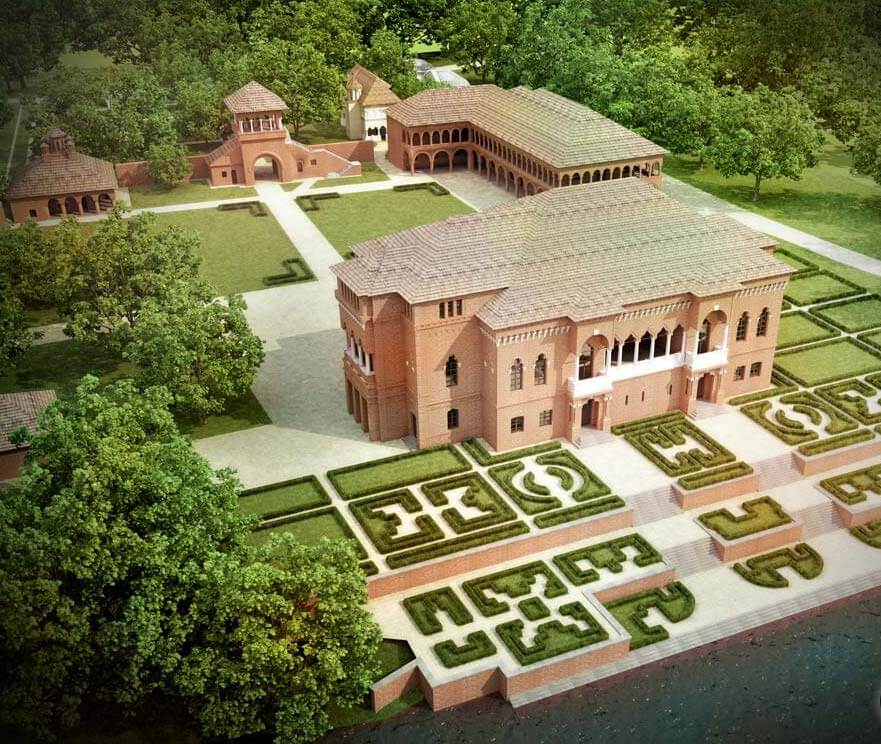 A historical monument with a special architecture, Mogoşoaia palace suffered many destructions over time and it was used in various ways depending on its rulers. In 1698, Prince Constantin Brâncoveanu decides to build a palace on 1698 in Brancovenesc style, the Romanian Renaissance style. 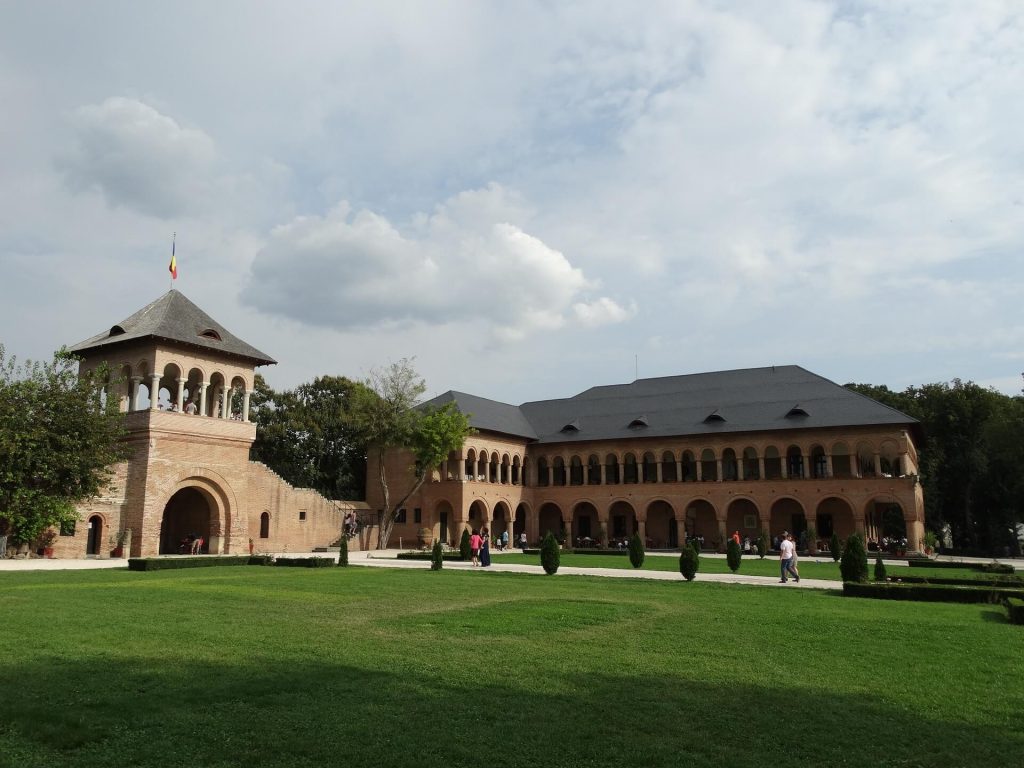 After his execution, the Ottomans turned the palace into an inn, the soldiers of the Romanian revolutionary Tudor Vladimirescu set up the camp during the 1821 revolution, and before World War I, Martha Bibescu used all the resources, especially the financial ones, to create a meeting place for the great personalities of the time and she succeeded. 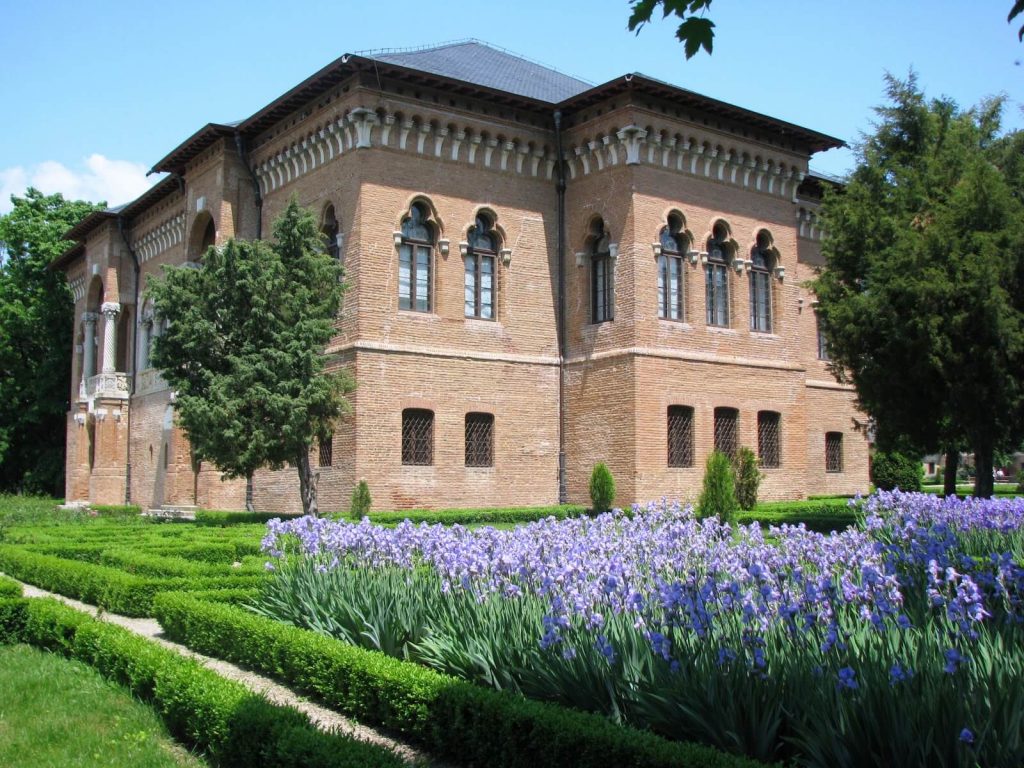 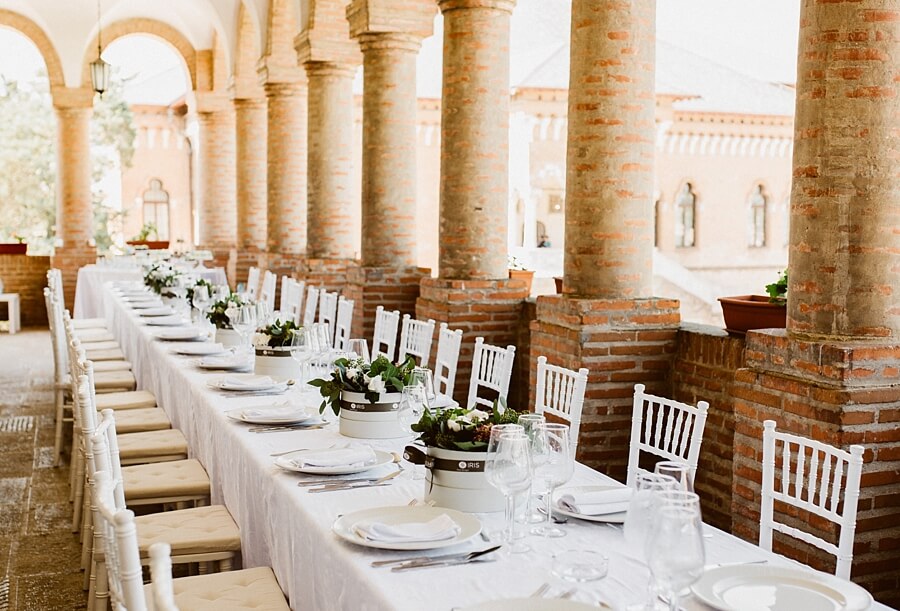 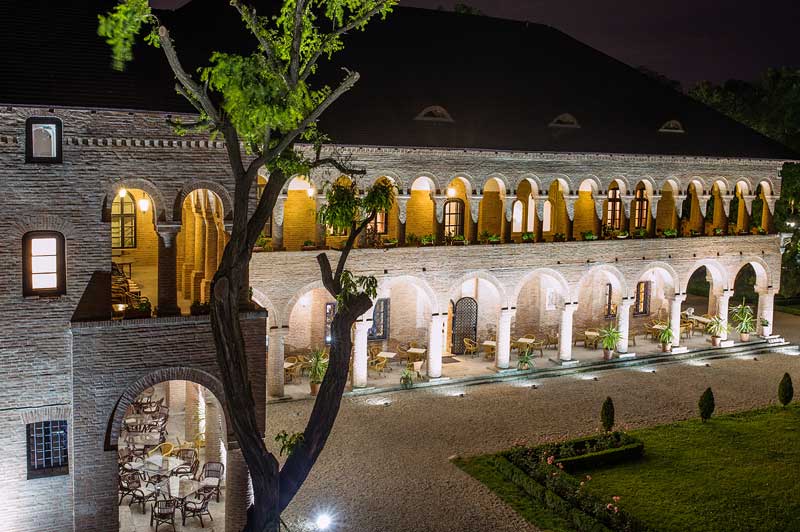 The palace amenities can accommodate small to very large groups, in 3 indoor reception rooms, an outdoor terrace, and the palace gardens.

It was raised by Barbu Ştirbey in 1850 as a palace-fortress. Over time, his descendants added two floors to the building and a series of modifications in Tudor style. The latest changes were brought after the First World War when new living spaces were added to the south-east. On the first floor stood the masters of the palace and the second floor was dedicated to the guests. 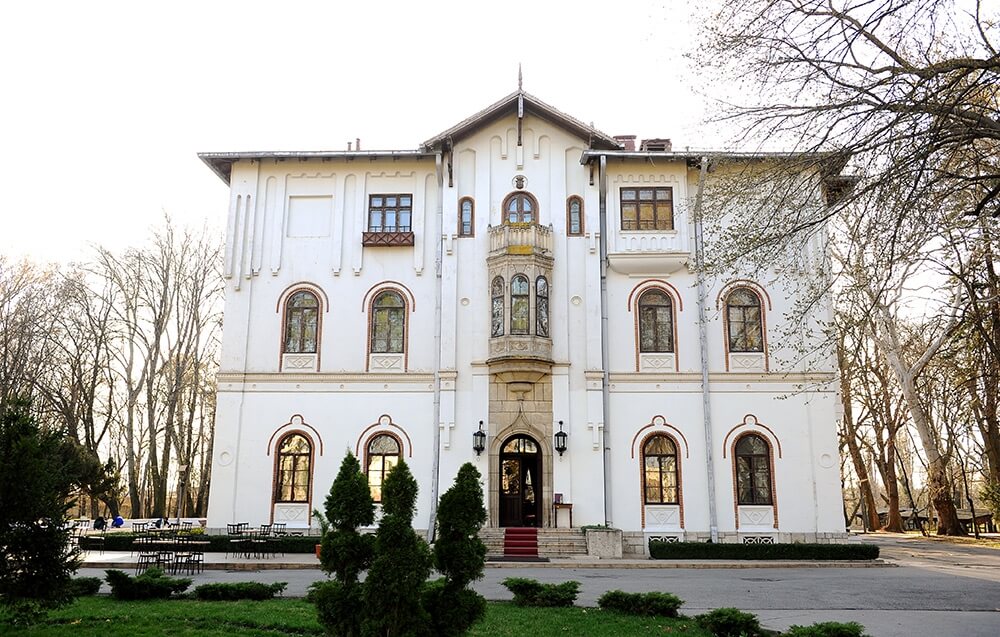 The palace has three communicating rooms (with a total area of approximately 200 sqm) and all the necessary facilities for events. Due to the fact that the lounges communicate with each other, but also have access to the main hall of the Palace, they can receive different destinations during the same event. The salons also communicate with the terrace behind the building, offering the opportunity to mix indoor and outdoor components within the same event. 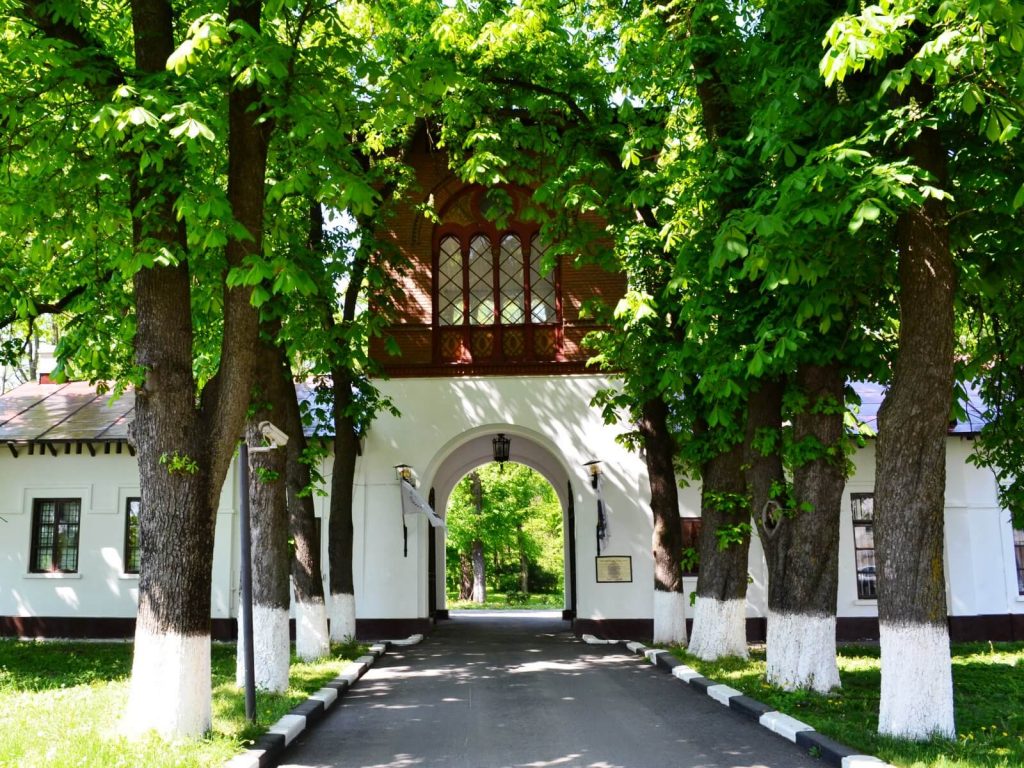 The terrace stretches around a decorative fountain, under the shadow of the secular trees and it can accommodate up to 120 guests. On the domain, there are also 2 other pavilions and a ballroom, a suitable destination for large events, up to 1,000 participants. 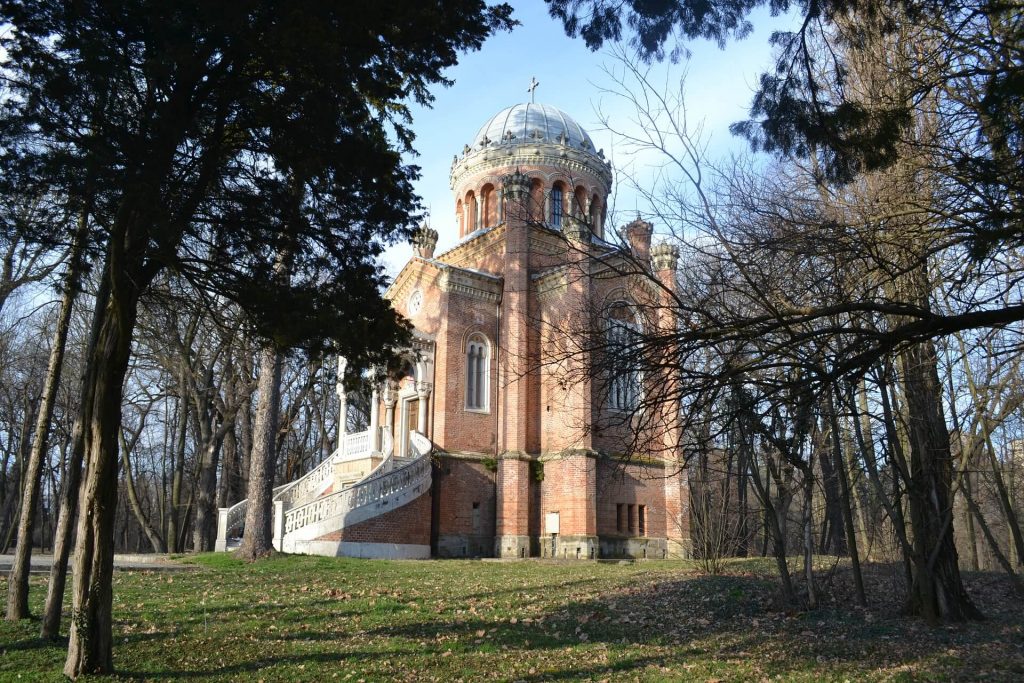 The gardens, the lake, the private chapel and the quiet surroundings at only 21km from Bucharest downtown make the Stirbey palace a popular destination. The domain hosts every year one of the top music festivals in Romania, SummerWell. 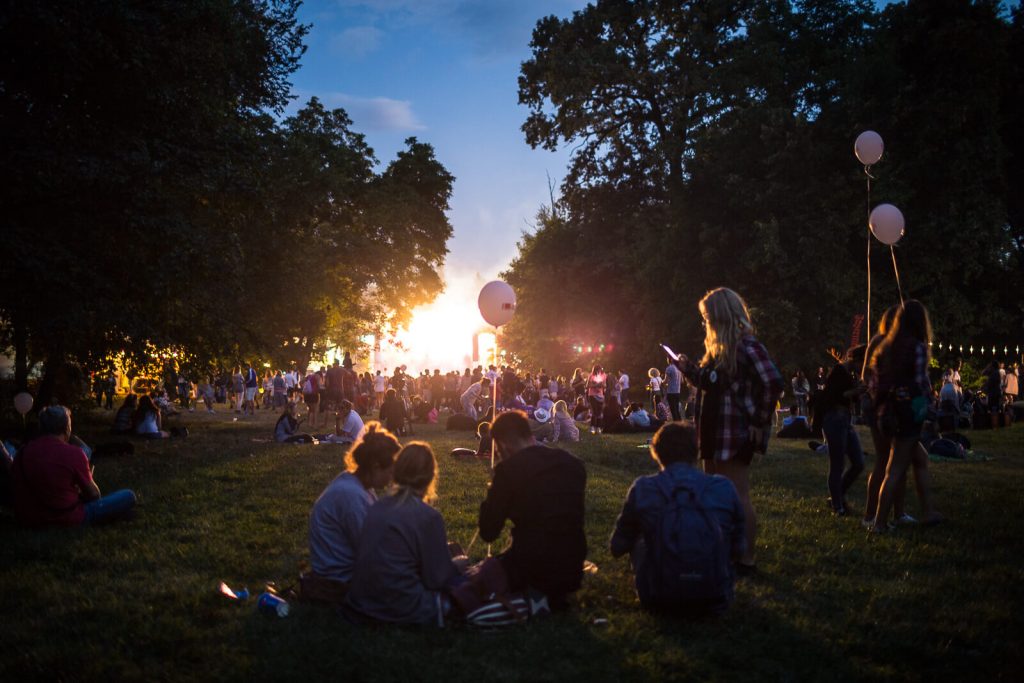 A former royal palace on the lake Snagov is at about 40 km northeast of Bucharest. The palace was built in the 1930s by Prince Nicholas, the younger brother of Carol II and extended extensively in the ’80s by Ceausescu family. Prince Nicholas never lived in the palace. In 1937, due to his misunderstandings with Carol II, his brother disinherits Prince Nicholas who leaves the country. Nicholas Ceausescu also did not live in the palace, but over the lake, in another complex of houses. This is why the estate was completed with a special boat bridge so that the presidential couple could easily get from the Residence Villa to the Palace.

Any event at the Snagov Palace can accommodate as many as 150 to 450 people, in a spacious ballroom which can give any event an unmatched grandeur. In the courtyard of the palace, there are many superb terraces where parties or ceremonies can be organized. The lawn in front of the palace is beautiful and well maintained and usually, large events are organized in this area. The domain owns a hotel with 8 lavish apartments which can accommodate the palace guests. 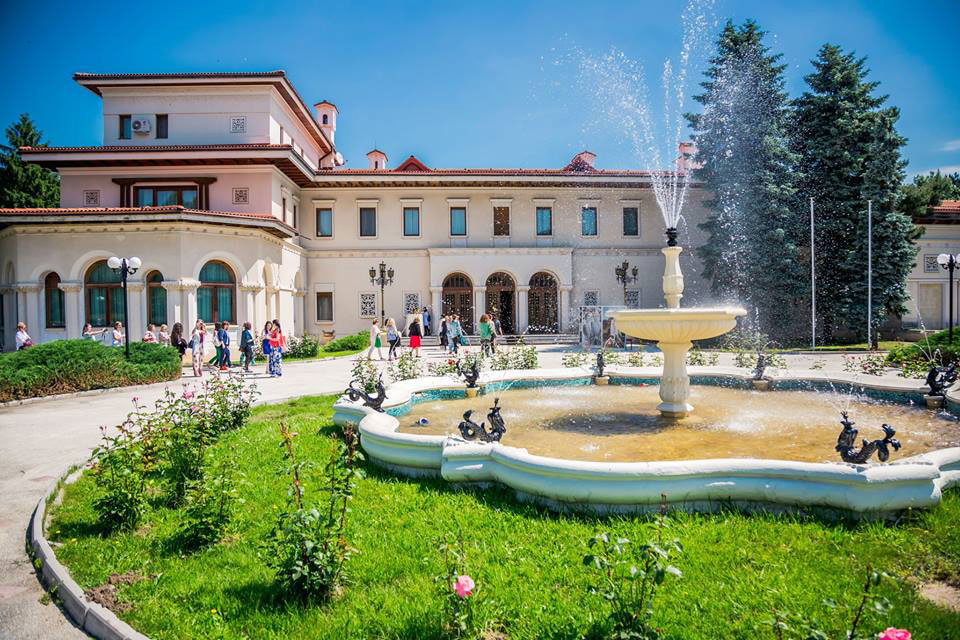 Palace of Parliament or the House of People is the heaviest building in the world and the 2nd largest administrative building in the world, after the Pentagon. It has 9 surface and 9 underground levels, 2 subatomic shelters and more than 1000 rooms, covering an area of over 300.000 sqm. Its construction is considered one of the 7 wonders of the modern world. Ceausescu’s palace is an effigy of Bucharest and the most popular tourist attraction in Bucharest. Since 1994 the Chamber of Deputies has been functioning here, and since 2004 the Romanian Senate activates in the same building. 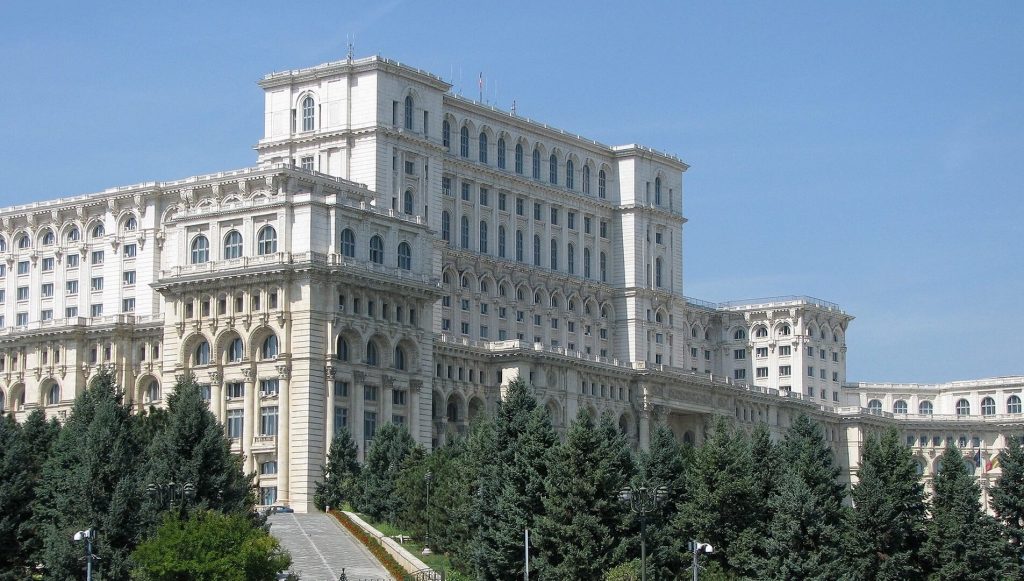 There are no less than 11 assembly rooms that can be rented for different events in Bucharest, for different purposes. The biggest is the Union Hall, with a surface of over 2000 sqm, which can easily accommodate around 2000 people.

In total, the conference and reception rooms in the House of People cover an area of 13,125 sqm which can be used for any type of events: from international summits to conferences, from theme parties to art exhibitions or cocktail parties. 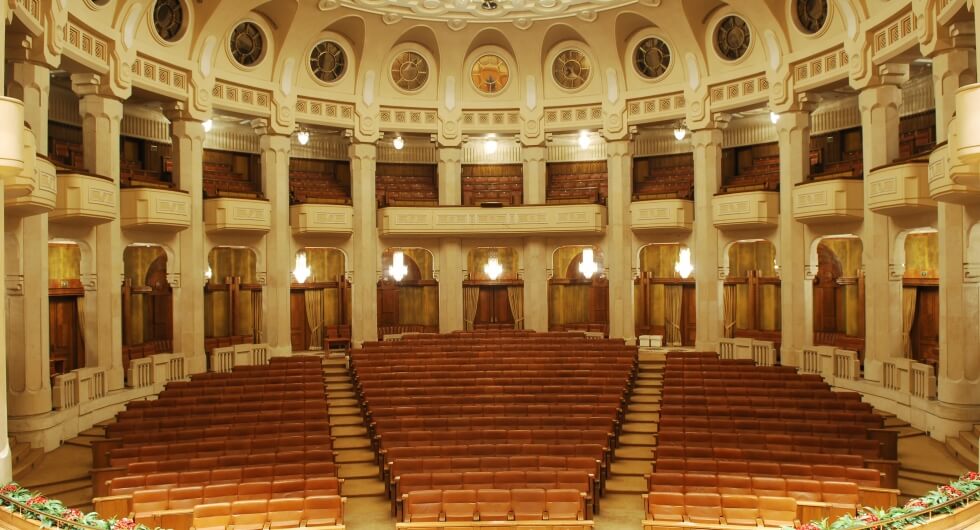 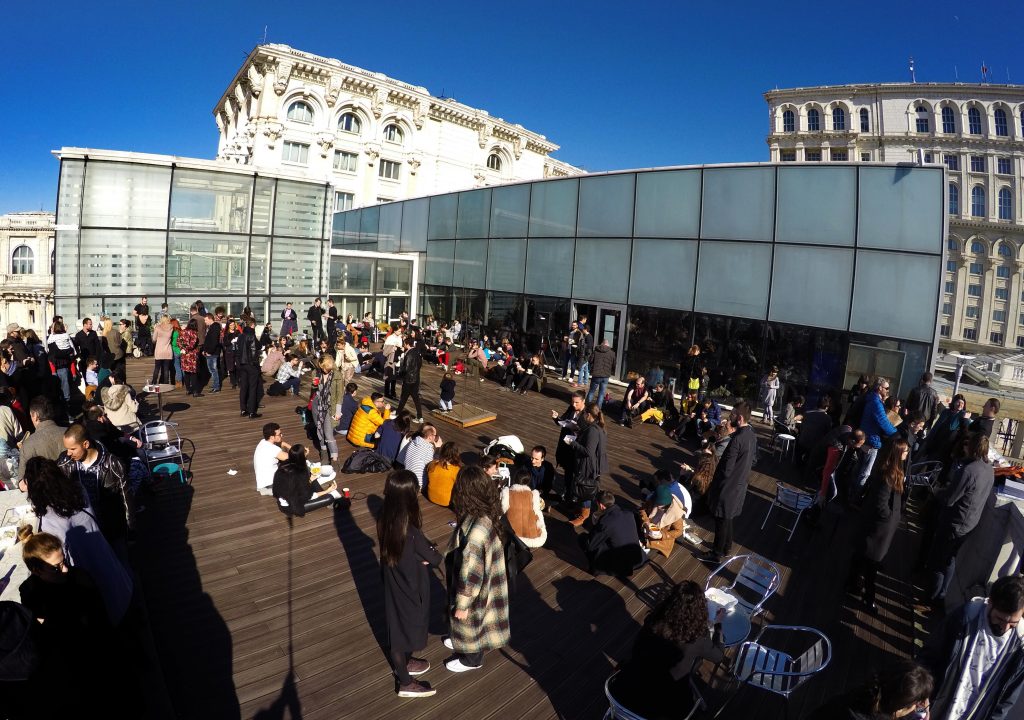 Such a megastructure obviously has a rich collection of legends, the most famous being related to the huge number of deaths (many killed intentionally during construction), underground secret tunnels, secret subway lines linking the palace with the airport and, last but not least, the ghosts walking along the palace corridors (the most famous being Anca, a 20-year-old girl who shows up and asks for help). For any ghost hunter aficionado, the Bucharest Palace of Parliament is a good starting point for a thematic tour in Romania.

As an East European destination management company, we have planned and executed from conference, congresses, and exhibitions, to gala dinners and team buildings. We bring your event to life, according to your request and within your budget.

We strongly believe that everything is possible and we design each event in order to satisfy the most demanding requests. Contact us today and let us FIX your event in Bucharest and Romania!