The Danube is a shelter for thousands of birds. Most species are found in the two UNESCO biosphere reserves in Romania: the Danube Delta and the Iron Gates Park.

The Danube Delta is a wetland heaven for birdwatchers. Its rich natural heritage represented both by the unique vegetation, and the abundance of bird species attract each year many wildlife observers. The multitude of bird species present a unique, complex and attractive biodiversity for those who want to enter, even for a little while in the secret life of birds. Birdwatching is a must-do trip while you travel to the Danube Delta and a top attraction for everyone who is passionate about these incredible creatures.

In fact, all Dobrogea is a paradise for birds. Here, in the ancient Scithya Minor, one of the largest and most important corridor of migration is passing through Europe. The vast majority of birds in Russia, Poland, the Baltic countries, Finland, which spend the winter in Africa, pass through Dobrogea. Together with Gibraltar, Bosphorus, Sicily or Falsterbo, Dobrogea is one of the most suitable places to see migrations around the world because it is crossed by the most important winds and airflows for birds migration.

TOP REASONS TO GO BIRDING IN THE DANUBE DELTA

Birds in the Danube Delta

Ornithologists have recorded over 300 species divided into 5 major categories:

Most of bird species you can encounter on your tour are aquatic species, representing 82% of the European aquatic avifauna, 114 species in total, of which 81 species nest here and 60 species migrate through the Delta.

Many of the birds are endangered in Europe and due to the human impact over their habitats, there are fewer places you can observe them. This is why you have more chances to see them in the Danube Delta more than anywhere else in Europe.

The Saker falcon is a raptor and the rarest specie of brooding birds in Romania, feeding on small birds, snakes, rodents and even ducks and geese. With a decreasing number worldwide, in Europe there are around 350-500 pairs and in Romania can be seen in Banat and Dobrogea, due to the conservation efforts to ensure the nesting. 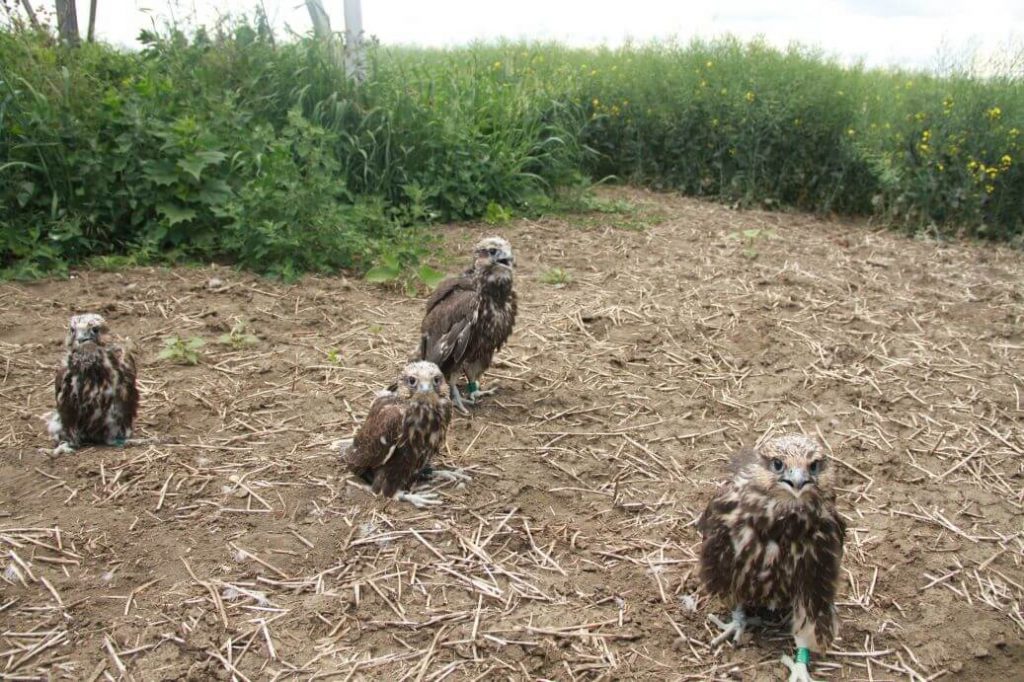 The European pygmy cormorant population is relatively small (up to 39,000 pairs) and suffered a moderate decline between 1970 and 1990. Although in some countries the decline continued, in Romania and Azerbaijan, where the largest nesting populations appeared, the flocks remained stable or slightly increased. In Romania, the largest colonies appear in the Danube Delta and inand on the lower corridor of the Danube. 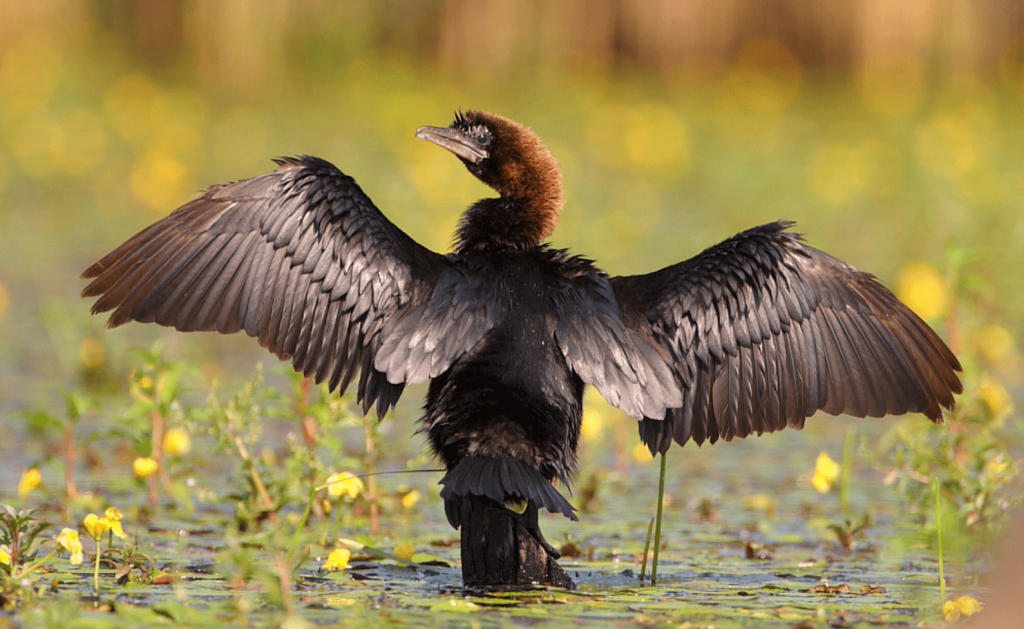 The European population of the Dalmatian pelican species is estimated at around 2,000 nesting pairs. Due to its low numbers and the continuous degradation of the nesting conditions, this species is considered threatened. 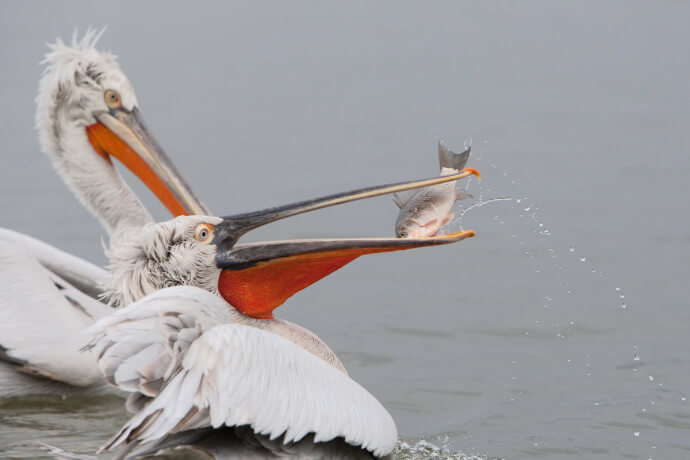 Next to the common pelican is the symbolic species of the Danube Delta. In Romania the Dalmatian pelican nests in the Danube Delta alongside its relatives, but also isolated, in small colonies of several dozen pairs, in the southern Danube Delta and the Razim-Sinoe lagoon complex. 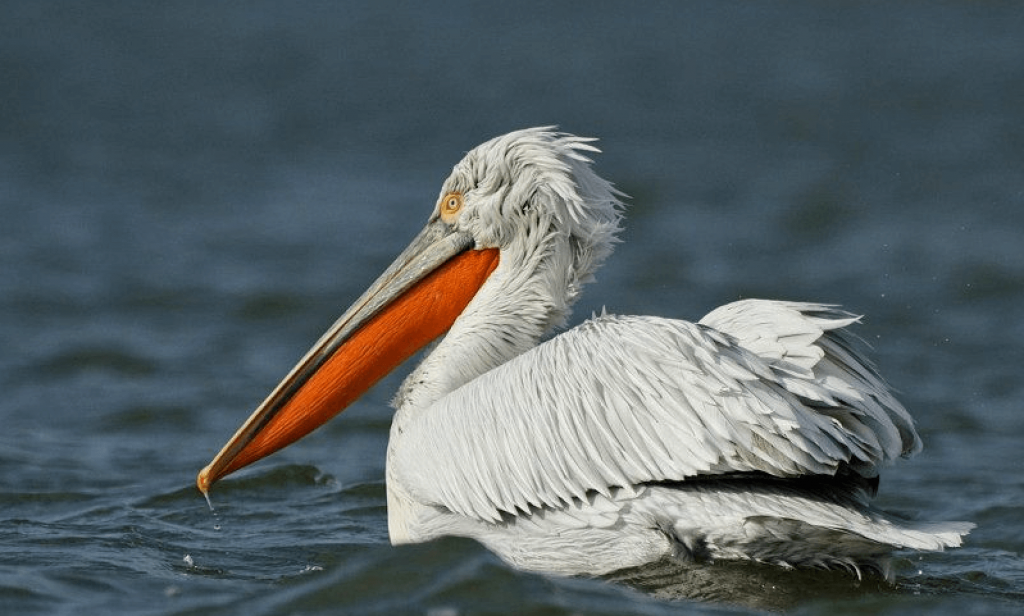 Our birdwatching specialists have gathered more than 140 species of birds you will most likely see on our Danube Delta birdwatching tours.As any other tour, some particular species can be seen at least once during this tour, and some other have a higher or lower probability depending on the period of the tour and on your luck!

The Danube Delta is very alive duringthe winter season as well, much more intense than you imagine. The lack of green vegetation facilitates the observation of birds and animals. Now it’s time to look for deers, elves, otters and nets of the Delta.

The red-breasted goose stays in the Danube Delta from November until March. 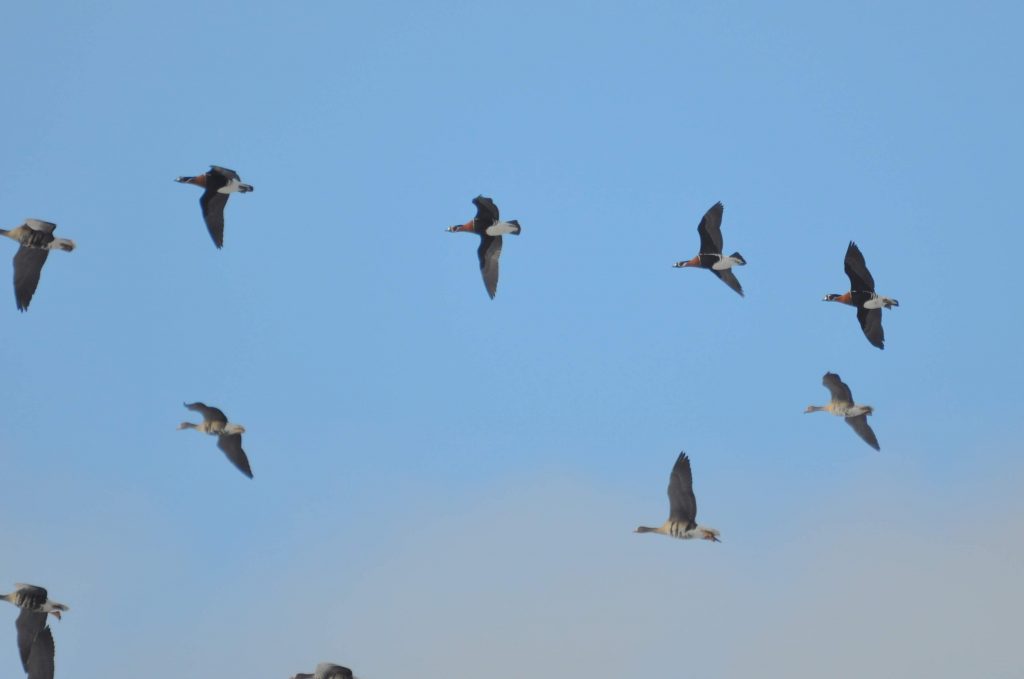 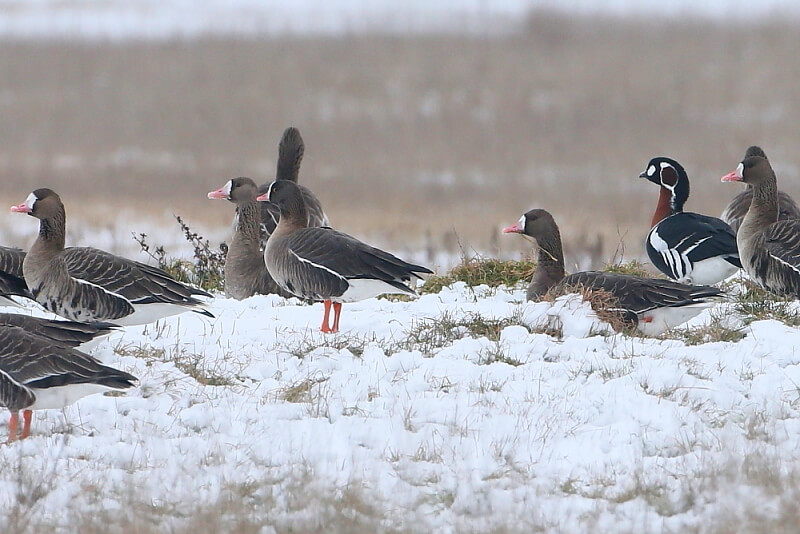 The red-crested pochard, the Northern shoveler, the Northern pintail, the smew, the common merganser gather in large flocks on the lakes. Now is the time to easily admire these beautiful birds.

Big raptors are also present.The juvenile northern white-tailed eagles spend their winter here and learn what it means to go through a cold season. The greater-spotted eagles lurk the duck flocks. The Western marsh harrier are giving hunting shows for anyone who is interested to watch them.

Life does not stop at all in the winter in the Danube Delta; everything is alive, and moving, fighting more harshly for survival.

The natural forests of Letea and Caraorman, as well as the meadows of Sfantu Gheorghe and Chilia, are unique as they grow on sandy soils, between sand dunes in the lower places. They are also discontinuous as the transition from forest to vegetation is sudden. 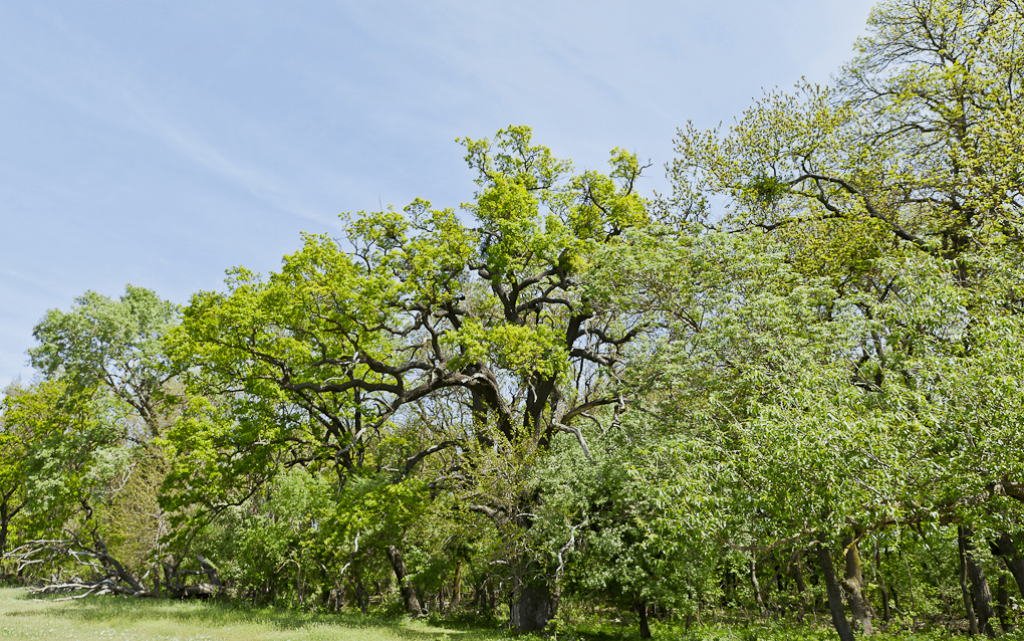 The Danube Delta is the only place in Europe where liana plants grow. You will also find secular oaks, sand dunes and wild horses flying freely. This is the little jungle of the Delta and the cradle of the delta raptors. 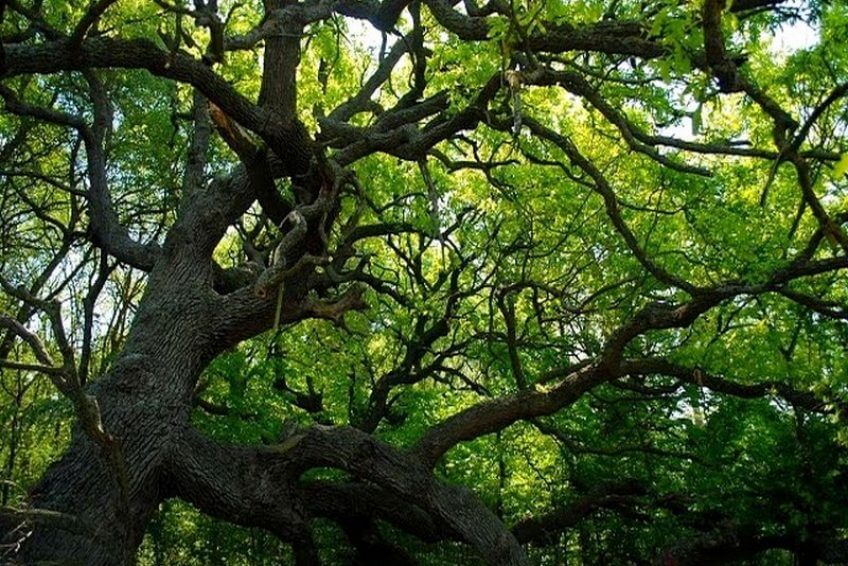 WILD BEACHES OF THE BLACK SEA

The most beautiful beaches on the Black Sea are here: long areas with fine sand, as well as areas covered in vegetation and shells. Here the sea water is clean and clear like nowhere else on the Black Sea coast. 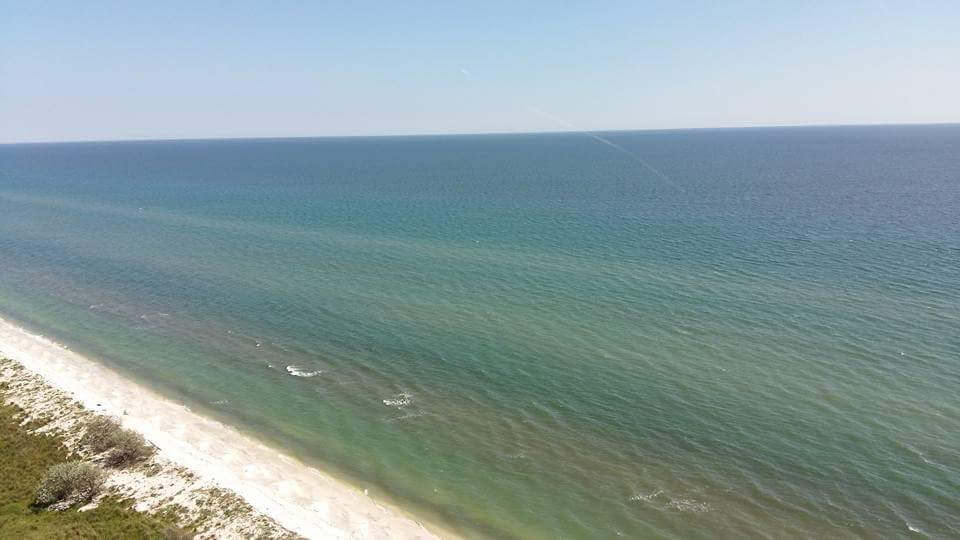 PEOPLE OF THE DELTA

In the Danube Delta live around 15,000 people: along with the Romanians, who are the majority, there are 21 other nationalities, of which the best represented are the Russians – the Lipovians, the Ukrainians as well as the Turks and the Tatars. 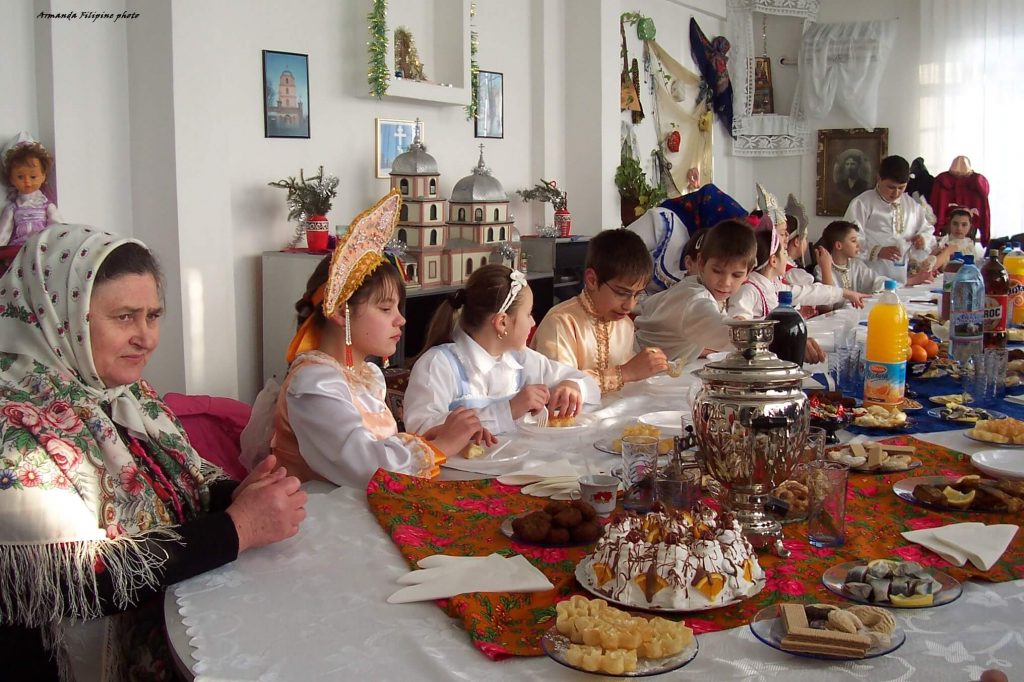 Due to this particularity, Delta is considered to be the one of the most cosmopolitan geographic units in the world. Birdwatching is a responsible way to travel, helping this communities to preserve their traditions and their old way of life in perfect harmony with nature. 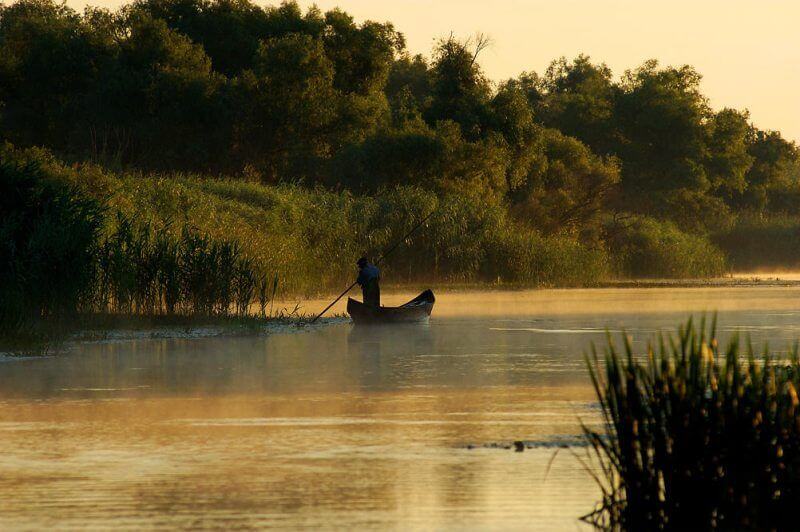 You can learn so much about the natural world by simply coming and observing. FixTravel birdwatching tours are suitable for everyone, and tailored for beginners or professional ornithologists and are carefully designed to ensure you a joyful holiday, full of birds.