Sibiu is a city to love, a city to discover slowly and thoroughly. Small and beautiful, a cosy gateway to Transylvania, Sibiu is a walkable destination, close to the Carpathian mountains, to the authentic Transylvanian villages, a city for culture and slow tourism.

Rewarded with three Michelin stars by the Michelin Green Guide, Sibiu should be a destination for group or corporate travel, as it offers much more than expected.

First of all it is easily reachable, as it has its own airport, with many connecting flights with the rest of Europe. Furthermore, it offers a great variety for accommodating many guests at once, from 4 and 5-star hotels to small guest houses and eco-friendly lodges.

In 2007, Sibiu was the European Capital of Culture and in 2019 it will become a European Gastronomic region. The Gault & Millau Guide for 2018 featured 8 restaurants from Sibiu in its top recommendations. The selection was due to the fact that the main ingredient of the local cuisine is the multicultural mosaic. Romanian, Saxon, Hungarian and Jewish flavours are perfectly combined on the plate, in a surprising Transylvanian fusion. For individuals and groups of people in love with organic and from farm to table food, old recipes and contemporary cuisine, Sibiu it’s a good start for a food and wine tour in Transylvania. 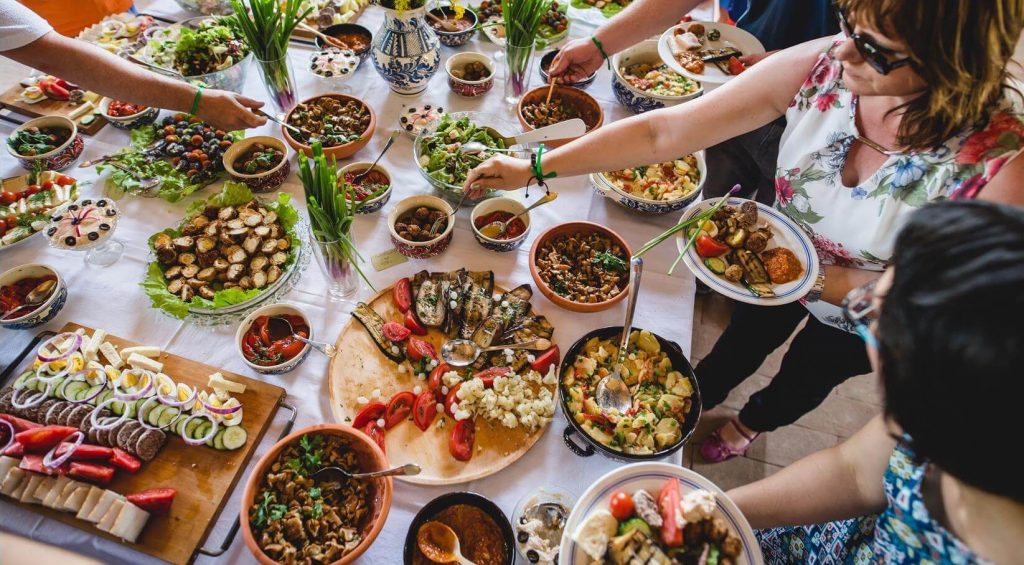 Plus, Sibiu hosts every year in June the third largest festival in Europe, the International Theatre Festival. The festival is a real celebration of the city, involving showrooms and unconventional spaces and especially public spaces. The central squares and streets of the historical centre are filled with audiences watching performers from all over the world: light and fireworks show, music performances and theatrical improvisations.

Hundreds of cultural events make the city vibrate until late at night during this period. For any art and culture lover, the event should not be missed. 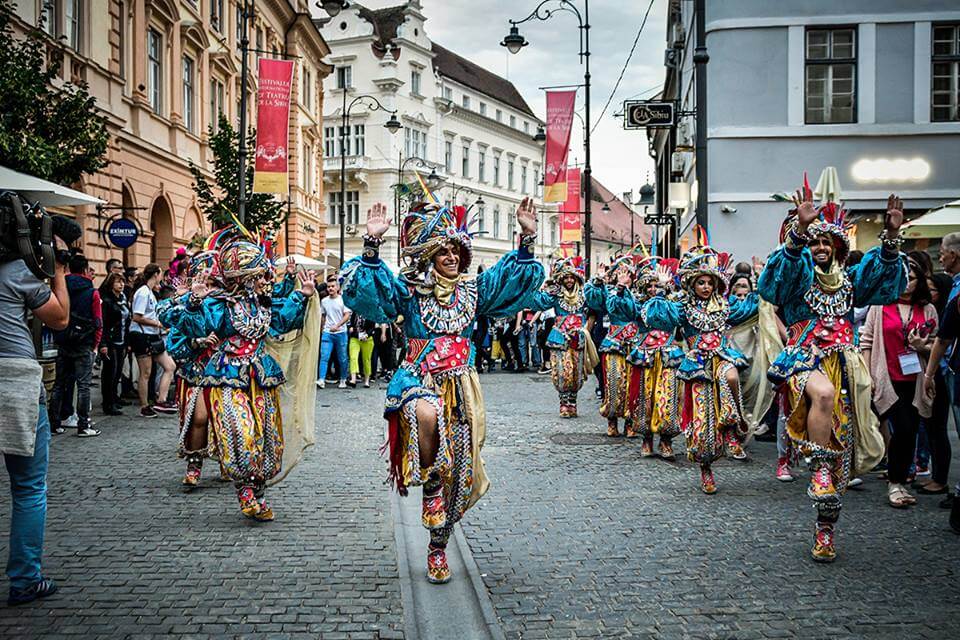 Sibiu is a medieval town, one of the seven cities (“Sieben Bürgen”) in Transylvania inhabited by the Saxons among Bistrita, Orastie, Brasov, Cluj, Medias and Sighisoara. The first mention of the fortress of Sibiu was made in 1191 under the name Cibinium, after the river trespassing the city.

The first documentary attestation under the name Hermannstadt dates from 1223. In the 14th century, Sibiu was the most important German city in Transylvania, organized in guilds, like all the Saxon fortresses. 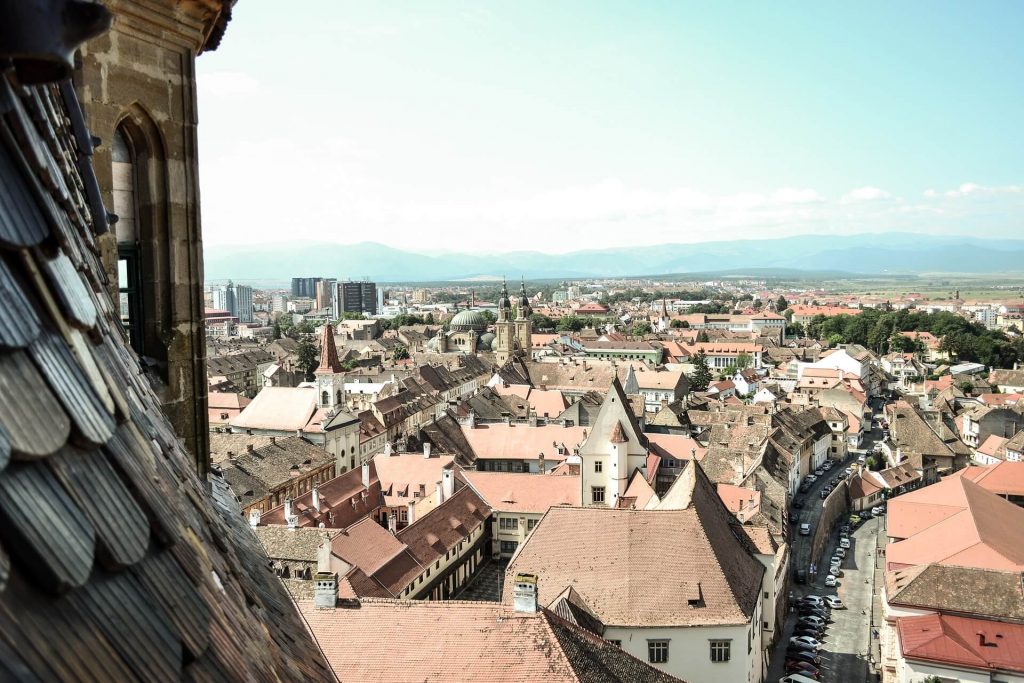 The walls of the old fortress, the defence towers named after the guilds of Sibiu, the central squares, each with their own histories, the preserved old buildings make this town a perfect place to discover the unaltered charm of the Medieval Transylvania.

The historical centre of Sibiu is actually the largest medieval urban ensemble in Romania. Buildings in various architectural styles are distinguished by the shape of the skylights, roofs, frames, gates and shutters that seem to whisper ancient stories.

The Tower of the Council (Turnul Sfatului), built in the 13th century offers one of the most spectacular views over the city and it is located exactly in the area separating the two main squares of Sibiu: Piata Mare (Grand Square) and Piata Mica (Small Square). The Tower has a rich history and in time it served as an observation tower, a fire tower, granary, prison and museum. Nowadays this space is dedicated to various arts. 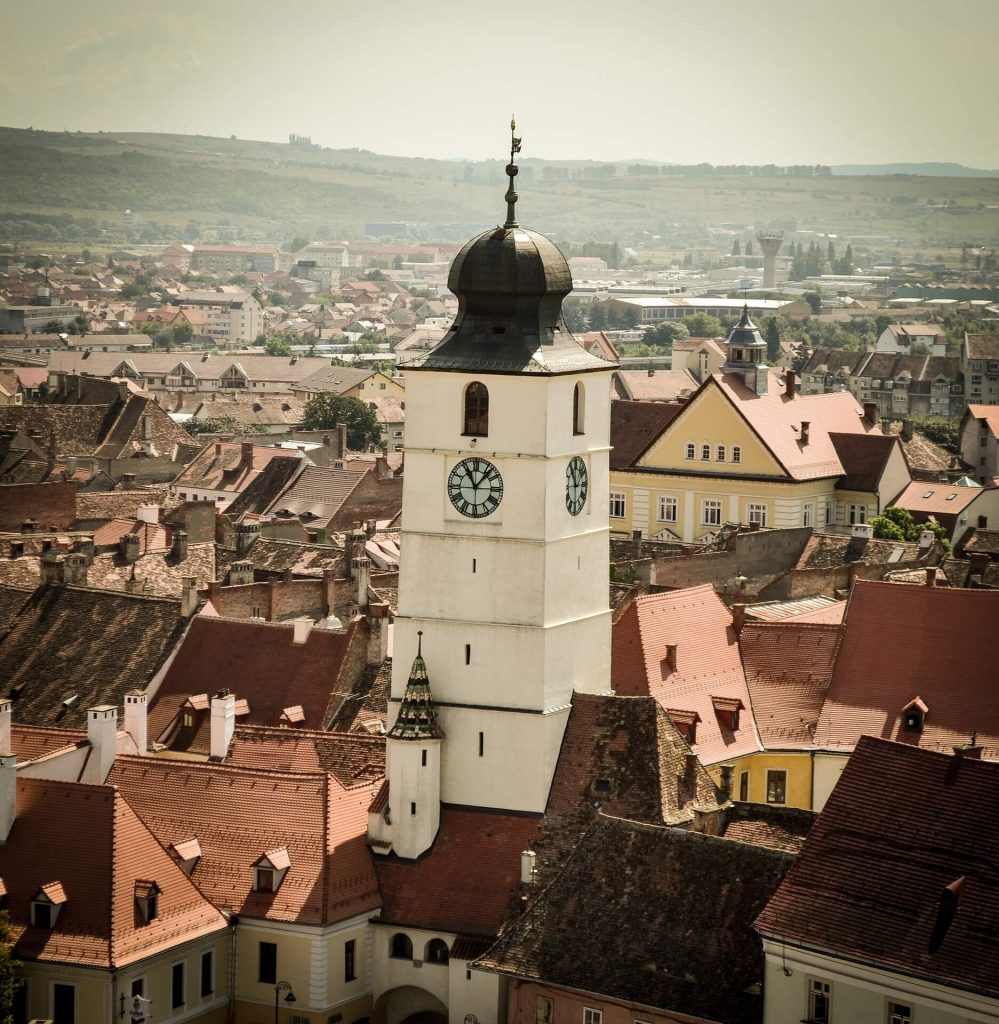 The most famous place in Sibiu is undoubtedly the Grand Market or the Grand Square. It is the heart of the city, the favourite meeting place for everyone and the Christmas Market during winter. Its roles have changed over time. The market was a trading place, first with cereals and objects drafted by the guilds, this is where the public meetings were held, the celebrations, as well as the trials and executions. In medievalHermannstadt, all public executions took place in the Grand Square (Der Grosse Ring), where culprits were tied to the pillory or shoved into the Cage of Fools. 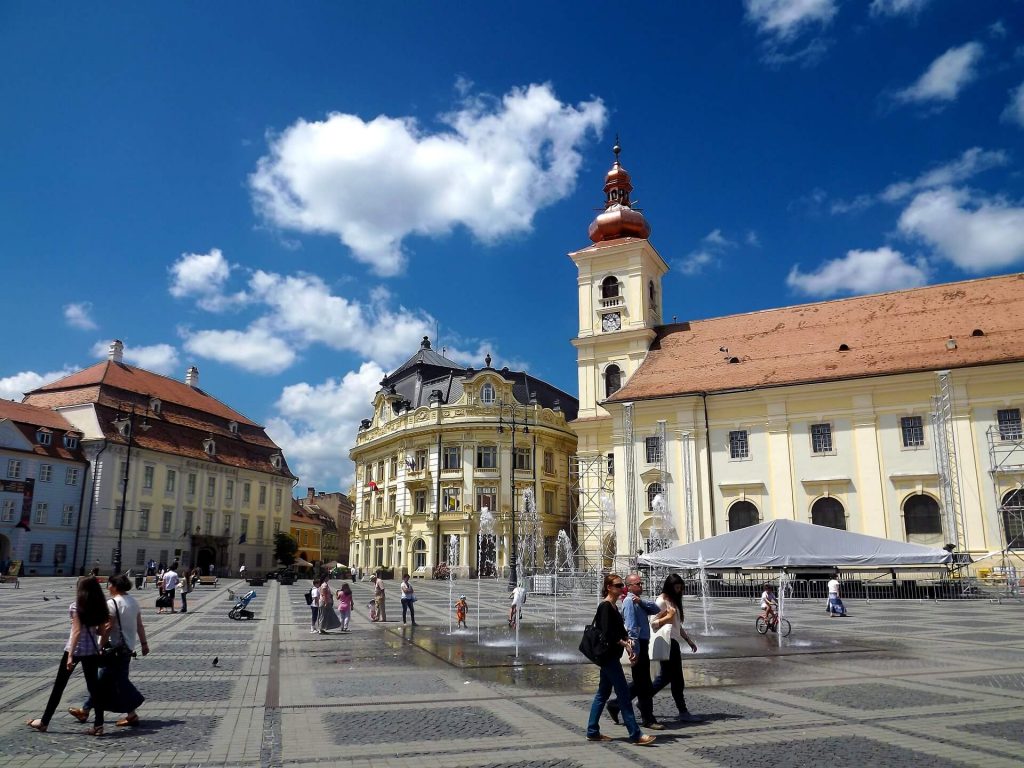 As you enter the Grand Square, you will see many historical buildings. The General’s House hosted during 1784-1904 the General Council of the Austrian troops in Transylvania. The Blue House, the one that belonged to a baron and where theatre performances took place, was the building of the University and, later, during the Second World War, it was the headquarters of the Gestapo. The beautiful green Hecht House was the first post office in Transylvania. Another old building is the Haler House, built in the 15th century in a Gothic style with an imposing stone portico and renaissance lions above the windows. The Lutsch House was built in the 13th century for the outstanding guests of the city. An old Roman Catholic church, whose foundation was built in 1726, completes the architectural baroque complex of the Grand Square. 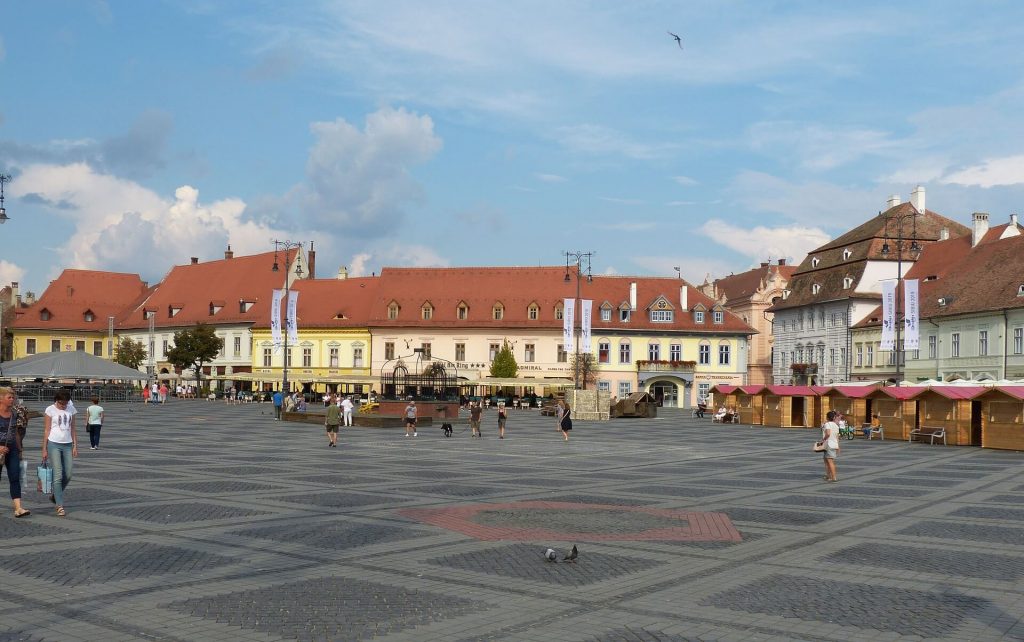 The Bruckenthal Palace is the oldest museum in Romania, built in the 18th century by Baron Samuel of Brukenthal, the former Governor of Transylvania. The palace was built to serve as a dwelling for the Baron, who also gathered an important collection of paintings. Built in Baroque style, similar to the Viennese palaces, Bruckenthal Palace has not undergone any major changes over time, hosting today the European Art Gallery at all its four levels. 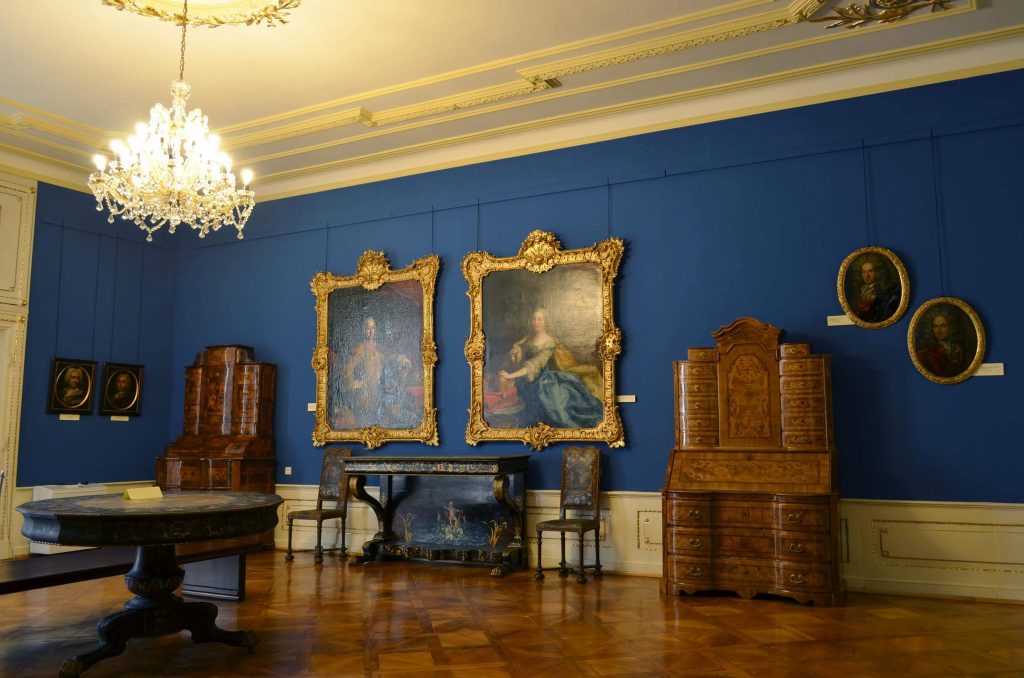 The Small Square, also known as the “Little Ring”, is inside the fortress’s second fortification, and it’s the old commercial centre of the city. The market is divided into two distinct parts delimited by Ocnei Street. All buildings have the same height and at the ground floor you can still admire the loggias, where the merchants once protected their goods, made in the above workshops and exposed to the buyers, as well as the lens skylights, called by the locals, the “eyes of the city”.

All the buildings in the Small Square are historical monuments, well-kept and well-maintained. In the Small Square, there are two museums: the Museum of Pharmacy and the House of Arts, which hosts the Saxon Ethnography Museum Emil Sigerus. The House of Arts has somehow a misleading name taking into consideration that for two centuries acted as a hall where the butlers occupied the ground floor, and on the first floor, there were the cloth and sheepskin manufactories. The Museum of Pharmacy is on the same site of an old pharmacy called At Black Bear, which operated here starting the 1600s.

The Liars bridge is the oldest functional, cast iron bridge in Romania. Its name is related to a series of legends of the place telling the story of those caught lying on this bridge. It is said that the bridge had ears and at the hearing of the lies the construction shuddered until the liar was brought with his feet on the ground. 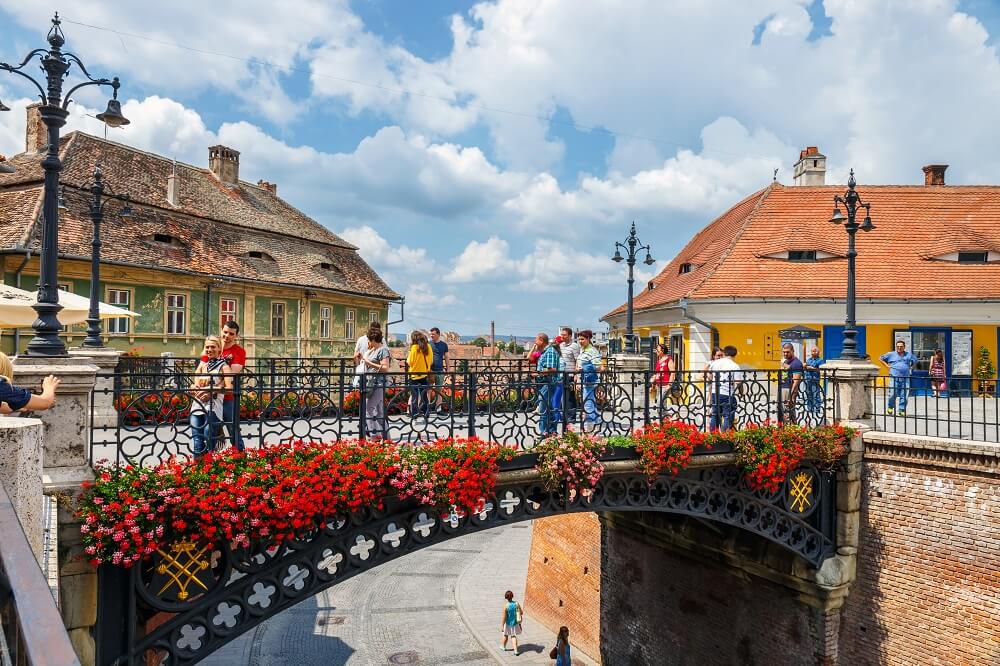 The fortified city of Sibiu has numerous passages, narrow streets, defence walls used as a measure of protection against enemies. The Stairs Passage is part of the fortification belt and connects the Lower Town to the Upper Town. It was built in the 14th century and is one of the most beautiful areas in Sibiu, with small shops and cosy terraces. 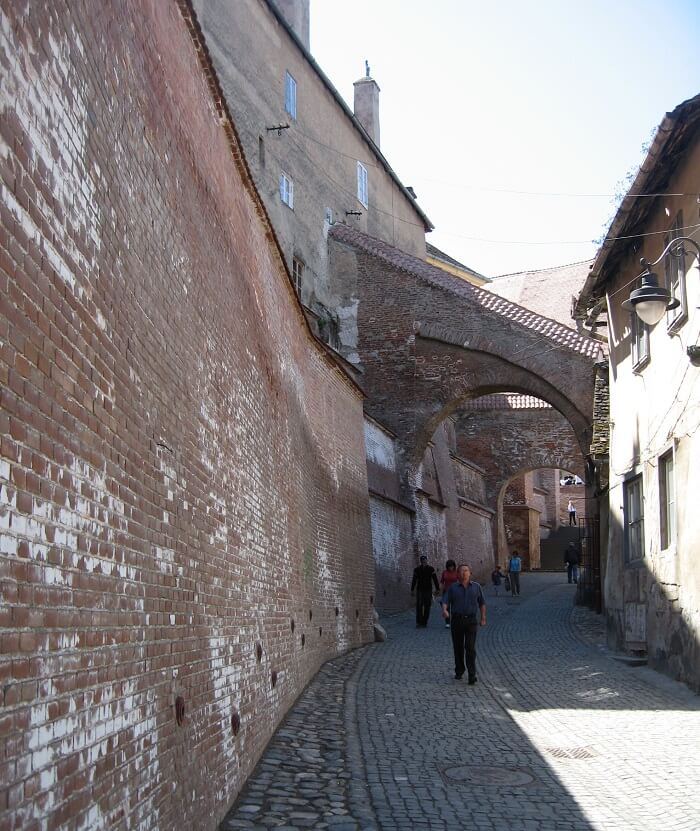 In the old days Sibiu was divided into the Upper Town and Lower Town, so several stairs were connected to the today’s historical centre. The stairs have been preserved until today and besides the Stairs passage mentioned above, there are many others worth the visit.

The Gold Stairs connects the Small Square to the Goldsmiths Square, another beautiful place of medieval Sibiu. The stairs passage descending from the Huet Square has a mysterious look. At the end of the passage, travellers will find the oldest restaurant in Romania, the Golden Barrel. 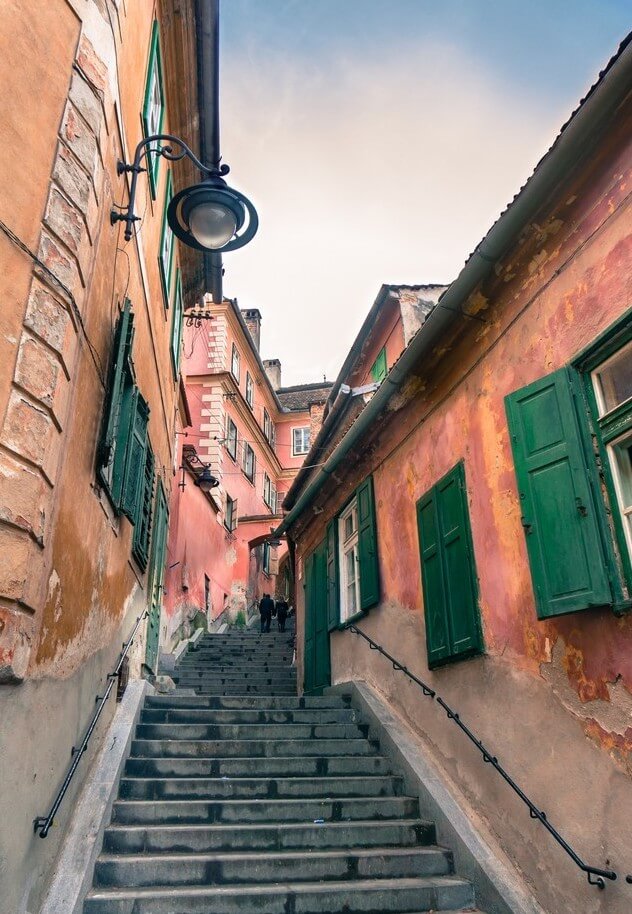 The Huet Square is a charming place, but its main attraction is the Evangelical Cathedral, which is nearly 500 years old. Beyond its grandiose size, the church has a gallery of 67 tombstones, unique in Romania. 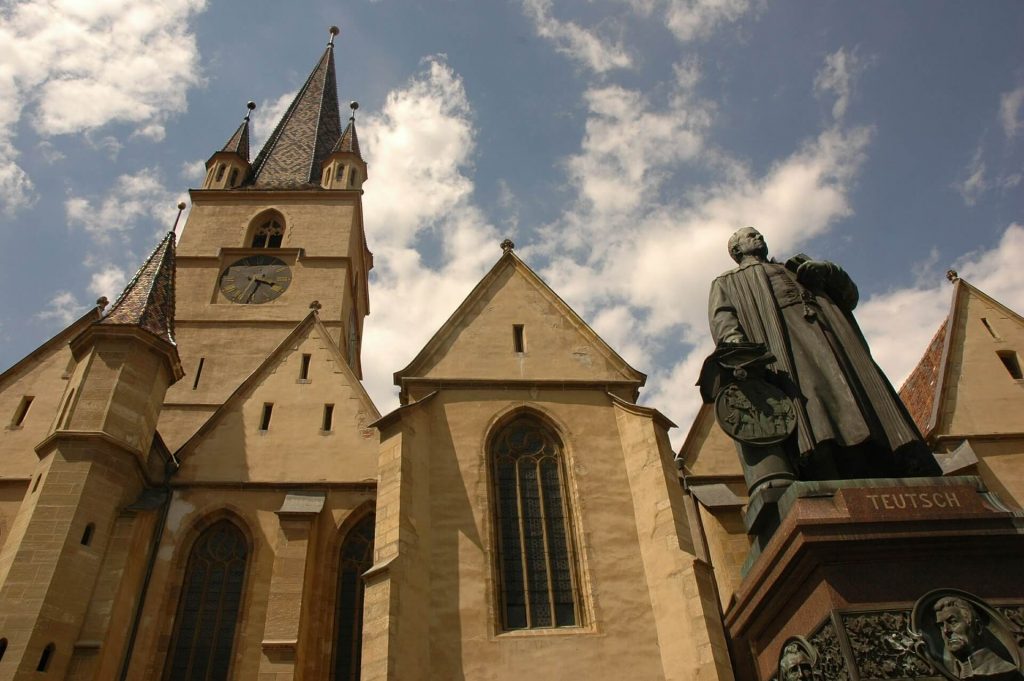 There are several worship places which will worth your visit while in Sibiu: The Ursulines church, the Reformed church, The Orthodox Cathedral, The Franciscan church, The Jesuit church and the Great Synagogue. All these monuments are the proof of the mix of cultures and beliefs that Sibiu has sheltered over time.

The Dumbrava Sibiului Natural Park or Dumbrava Forest stretches over tens of hectares at only 4 kilometres distance from the city centre. This park houses the largest open-air museum in Europe, the Astra Museum. It is one of the kind places in Romania where you can find the specific households of each rural area, as they were built by the former craftsmen. The whole ensemble is a representation of Romania’s countryside, in a magnificent landscape. 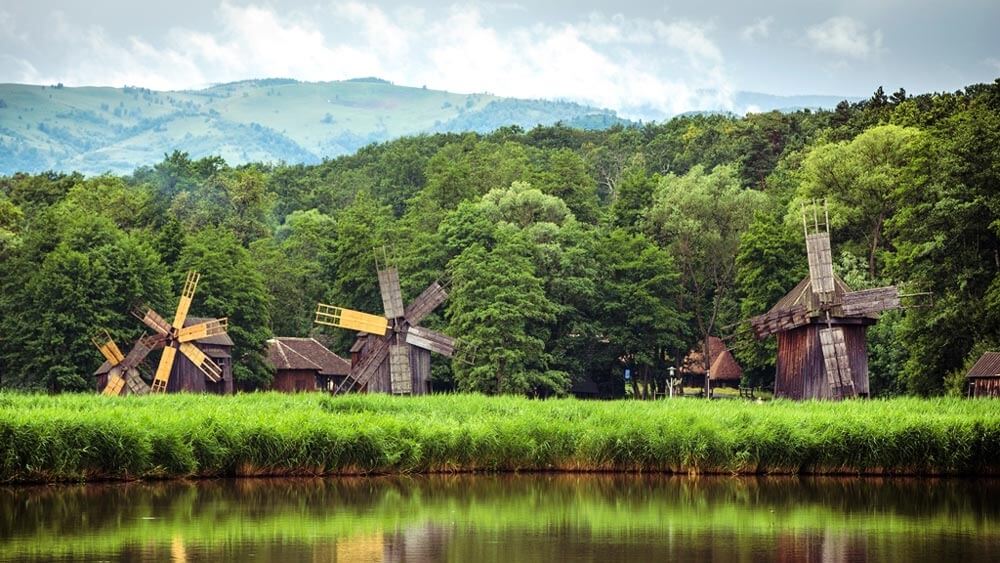 In the immediate vicinity of Sibiu, there is Marginimea Sibiului, declared a European Destination of Excellence and awarded with different tourism distinctions. The villages part of this region in Sibiu district, known as Marginimea Sibiului, have their own charm, not seen in any another European region: monument-churches, villages that have their own story, handcrafts and ancient traditions, a local gastronomy you no longer find in any other area of Romania or anywhere else in the world, and of course, incredible natural surroundings. 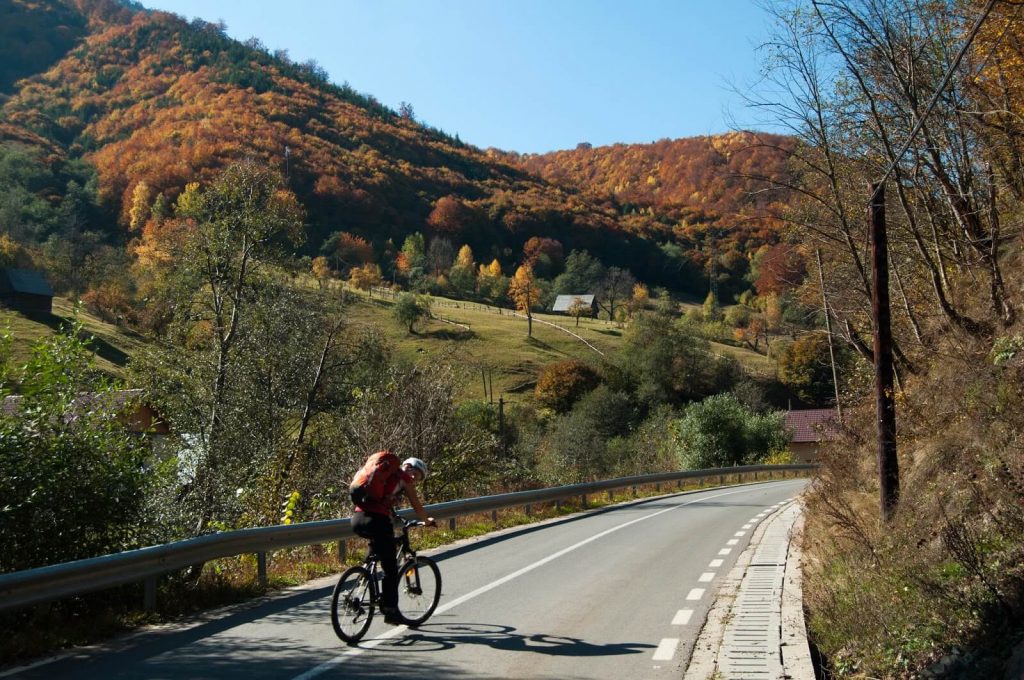 Close to Sibiu is another special place: The Carta Abbey. It is a Cistercian monastery, made entirely from stone, dating from 1202, the oldest building in Transylvania and the only Cistercian abbey in Romania. The legends say that the abbey is haunted by ghosts and that in its rooms on the ground floor and in the cellars, the chairs move and the walls tremble. The former priest was absolutely convinced that there were ghosts in this place. 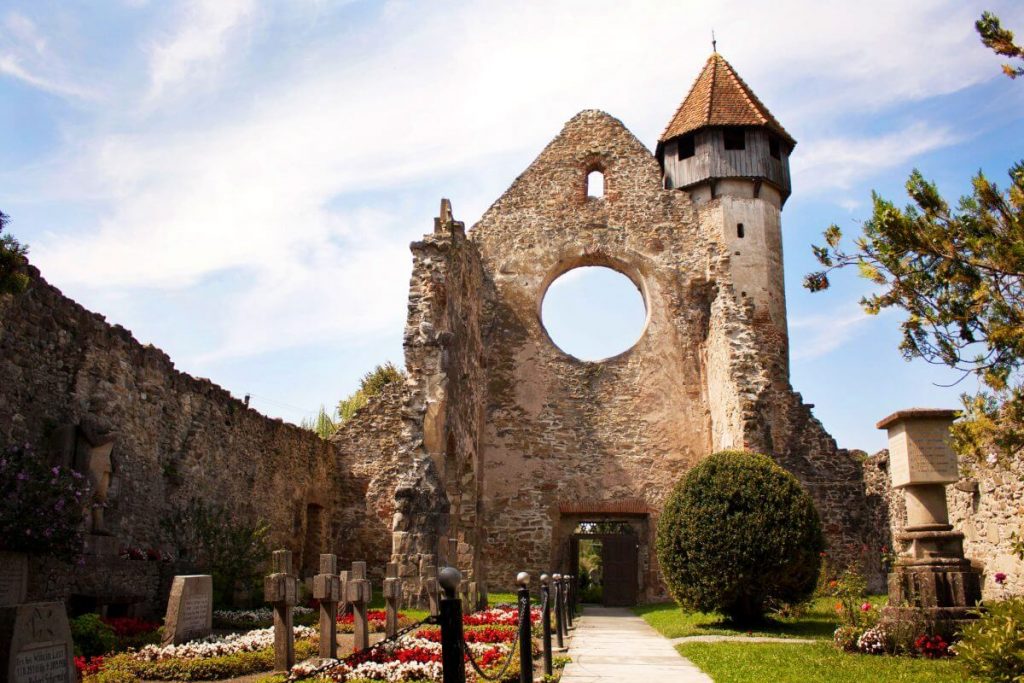 At only 32 km from the Sibiu’s centre, Paltinis is the oldest mountain resort in Romania. It is a great destination for winter sports or outdoor and nature lovers who can walk to the Iezerele Cindrelului Reservation or to the famous glacial lakes. Once in Paltinis, you can ski during the winter season, explore nearby trails on special routes, or admire the area’s distinctive natural surroundings. Hiking to Oncesti Meadow, Oncesti Peak, Gaujoara Sheepfold or the Meadow of Wolves is a must for anyone who loves wild nature. 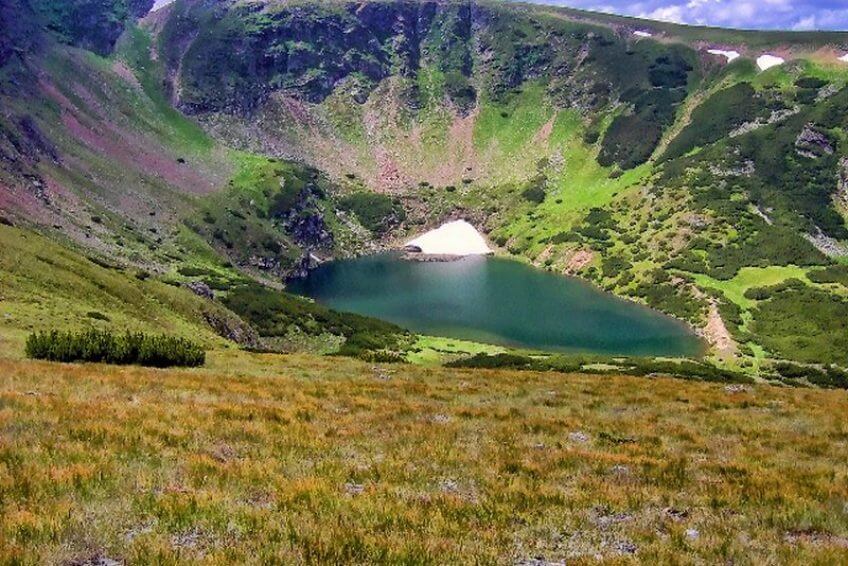 Although a small town, Sibiu is a cosmopolite city, an amazing destination to discover the mix of Saxon, Hungarian and Romanian culture, the rich history and traditions, the mouth-watering gastronomy, the wild nature and so many idyllic places. 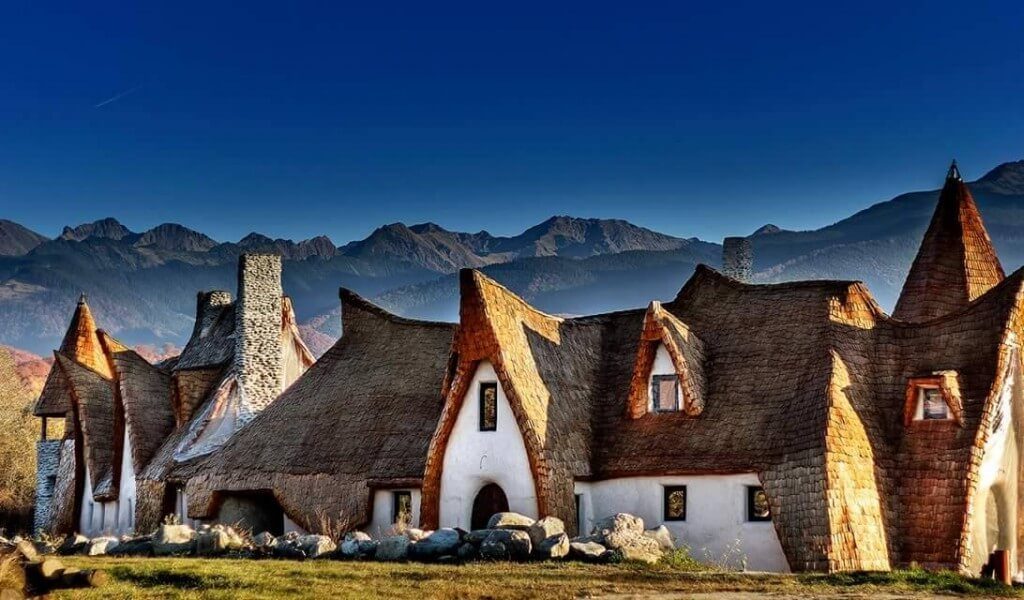 Our team is ready to create a tailor-made program so you can enjoy the best of Sibiu and its surroundings! Contact us today and let us be your Romanian destination management company.

Bucharest or where to party in Eastern Europe